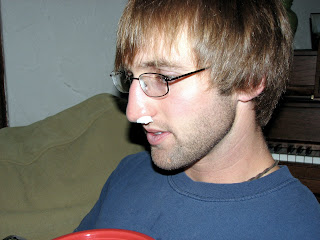 Adam insists on sticking pieces of tissue up his nose when he's sick.  This way, he doesn't have to make his nose raw by constant wiping and blowing. 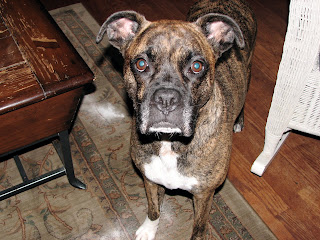 Powers looking all oppressed and victimized after the incident.  Note the Arm & Hammer on the rug.  Wonder who caused that, Powers?
The Gruesome Twosome...
Today started out like any other Sunday.  Adam has a test tomorrow so he was prepared to study all day.  We went to church last night so there wasn't much on the itinerary for today besides grocery store & a small group lunch picnic.  Well, Adam woke up and he didn't feel well.  His throat hurt and he felt like he was getting sick.  Bummer.
So, after making sure that my sweet husband was okay and all propped up on the green couch with his box of kleenex and cardiovascular notes, I left for the grocery store.  I should've known that things would go awry when, upon leaving the grocery store, my carton of eggs jumped out of the buggy and landed upside down on the ground with a horrible crunching sound.
I returned home and Adam & Powers came outside to help me unload.  At that point, I noticed a strange smell but I didn't think too much of it.  Could be some weird plant, could be rainy trash smell, who knows.  Well, we walk inside, Powers ahead of us, and it's worse.  Our house smells funky.
"What's that smell?"   I ask.
" I'm not sure.  Smells like dead animal, sort of.  Or a skunk."  Adam replied.
"Dear Lord, did Powers get sprayed?"  I ponder.
"I think I'm going to throw up."  Adam replied, sprinting upstairs.
A few minutes and several hurls later, Adam reemerges.  He feels a little better now.  Apparently, he'd had a sore throat cocktail of green tea mixed with possibly expired lemon juice, cough drops, chloraseptic relief strips, and an airborne.  Mix all that with drainage and the horrifying smell of Powers all skunked out and you get Sickytime! 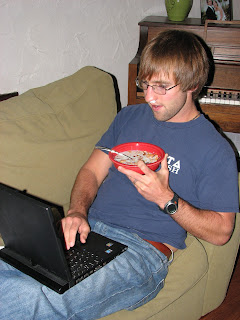 Adam eating cereal post sore-throat-cocktail-evacuation.
So, Adam is out of the game and the weather is pretty cool today- around 59 degrees right now so I didn't want to give Powers a bath outside.  Let's face it, when you give a dog a bath, you're also giving yourself a bath.  And I don't like cold water hose baths outside when the temp is in the 50's.  So, for the first time ever, I call Powers upstairs and force him into the lukewarm shower.
Something I don't understand about dogs.  They'll jump into frigid lake Erie without a care;  they'll chase a ball into a sewage creek and not have a worry in the world.  But try to bathe them- whether inside or outside, and it's like chinese water torture for some reason.
Anywhoos, after soaking every surface of my bathroom, Powers finally gets his bath and smells much better.  We walk downstairs to realize, hey.   It still smells horrible down here.  Like...maybe Powers rubbed against every surface in our downstairs and the skunk stink molecules are spreading like wildfire.
So here I sit.  In our stinky downstairs with Arm & Hammer pet smell vaccuum stuff on most surfaces.  We're fine.  Life is funny and sometimes you just need to take some pictures of your surroundings and blog about what just happened so you don't forget.  I just needed to share our funny morning with you.  Hope you have a nice Sunday!
Posted by the Jennings secede from the South at 8:15 AM

That's a lot to happen in one Sunday morning. Kind of makes you think we should have gone to church today instead of yesterday??? Who knows. I hope your boys are feeling better.

Second time I've look at this blog, or any blog....

You guys need to Get a Life...

Sad to think future professionals waste time like this....

OK-ANNOYMOUS-you have made MOMMA MAD & A MAD MOMMA IS A BAD DEAL! DON'T READ THE BLOG-PLEASE and if you have MORE IMPORTANT THINGS TO DO-PLEASE DO THEM & GO AWAY! IF YOU DON'T LIKE IT-DON'T COMMENT AND JUST GO AWAY-NO ONE FORCED YOU TO READ IT TO BEGIN WITH!

CCJ-sorry about your morning and that Adam is sick & Powers is stinky! You needed your Momma there to help. I think your post was hilarious-of course I also can't smell the results.

Anonymous, you need a sense of humor...possibly you are a professional who takes life a bit too seriously! :)

Also, I have never heard of the tissues in the nose idea except for with bloody noses. Maybe I'll give it a try next time. Hope you are having better luck with the smell!

YEAH MR. THINKYOURSOHIGHANDMIGHTY anonymous man/woman! GO AWAY! Camille- you rock and you always make me laugh and I am so thankful to have you as a blogging buddy.

As a current professional who spends some of his time reading blogs, I find your blog entertaining and I enjoy reading it. Please don't be persuaded to do anything different because an anonymous poster has a stick up his ass.

I thought Doc's didn't get sick??? Also, that sounds like a medicinal cocktail that Brittany Spears would fix and chug......

That sux. Unfortunately we seem to have skunk incidents a little more frequently than we'd like out here in the boonies, but it's always a PITA. The bath never quite cuts it. The lemon juice, tomato juice, blah, blah, blah, never does it either.

Time to shave Powers bald and take pictures that you can show him later - "SEE? THIS IS WHAT HAPPENS WHEN YOU MESS WITH SKUNK! NO MORE SKUNKY!"

Oh, and I also bought eggs on Sunday too!