Ok, soooo it took a while for us to pick this time around but the name is
Elliot Hayden Jennings
We obviously love the old-fashioned literary names, huh? First Henry James now a Mr. Elliot...
Elliot means The Lord is my God according to the name website we used for research. With Henry, we didn't really consider name meaning too much but he has certainly lived into his name meaning..."king of the house." We also are inspired by Jim Elliot & I love Elisabeth Elliot's writings. Passion and Purity was one of my favorite books in high school. Hayden means "hedged valley" which we've totally taken and hope to mean that he'll be hedged in by God's love.
I actually really like the name Hayden alone but, not knowing how many kids we'll have, it feels like we're setting ourselves up to do all H names then and that could be challenging.
Remember, no negative comments on the name, please. It's a done deal. Unless the baby comes out looking like a Sam or Billy or something. Then, we'll reassess.
Posted by the Jennings secede from the South at 4:26 AM 23 comments:

So, I went to the doctor today and everything seems fine and they scheduled my c-section for 10-25-10,which is a Monday. (Remember that I ended up having to have a c-section with Henry after my stubborn cervix wouldn't cooperate?) So, any of you 2nd time c-sectioners,how does it compare? I am so thankful that my Mom will be with us for a while because I hear that you're not supposed to pick up anything heavy (i.e. a toddler) for a couple of weeks. I can't imagine how that will go down but, thank the Good Lord, Henry is super attached to his Daddy and not as much me these days. That will hopefully ease the transition!
Did I mention that we have decided upon a name? We have! Maybe I will share it tomorrow! But only if we clarify that "appropriate" comments are positive affirmations or exclamations regarding cuteness. "Inappropriate" comments are negative opinions on the aforementioned name. We're not taking a poll- it's already been decided. So, go ahead and wrap your mind around that, negative nay-sayers.
Have a great Tuesday! I am hosting playgroup today and excited to see some friends!
Posted by the Jennings secede from the South at 2:36 AM 10 comments: 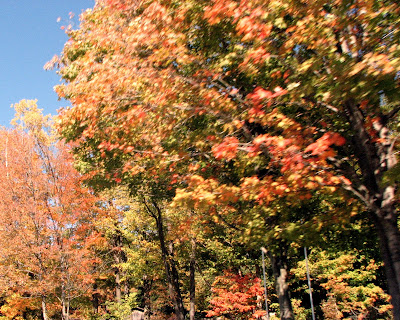 No matter how great the trip, can enough be said about how marvelous it is to be in your own home again? (especially when you washed your sheets just before you left!) In case you missed it, Adam has been gone since August 27th, when he left PA in my station wagon and drove down to Texas for a rotation. My Mom arrived on the same day and we worked on the nursery before leaving on August 31st to fly with Henry down to Louisiana. I stayed in Louisiana for a couple of weeks before I headed over to Texas to stay with my in-laws and Adam.
It was an amazing visit- it does my heart good to see Henry being loved on by his grandparents and family. I was able to be present for a friend's engagement. I relaxed and didn't do much (any) housework at all and spent time with friends and family. It was a good month and so refreshing. But when we flew back to good ol' PA on Saturday, my heart was happy. It was FALL here (my favorite!), we saw some dear friends, and I just felt ready- like, it's a new season here and we're entering this new season with another wonderful son and I am excited.
A little funny story for you is this: First off, we realized that after yesterday, Henry has been on 20 individual flights in his 17 months on earth. The kid is a frequent flyer champ! Secondly, this was the first trip where we bought him his own seat. The last trip did not go well when he was in our laps and we thought he would sleep better/be less squirmy in his own car seat (essentially tied down).
Well, it did work out well but on the way home, Henry discovered that he could kick the seat in front of him really well with the height and clearance that his car seat gave him. Score! The guy in front of him was a super corporate 30-something guy with no wedding ring and presumably no kids. Yikes. Henry was sitting next to Adam so I offered to switch seats with this guy since, despite our admonishments, Henry would probably repeatedly kick his seat. Super-corporate guy refused my offer but about 20 minutes (and a few kicks) later, he did order rum & coke (it was 9:15 a.m.).
Posted by the Jennings secede from the South at 2:34 AM 7 comments: 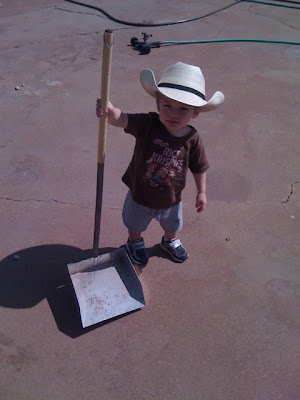 I've been a bad, bad blogger. I shall return, though, I shall! With posts and updates and ramblings and silliness.
Have a happy Wednesday!
Posted by the Jennings secede from the South at 8:51 AM 2 comments: 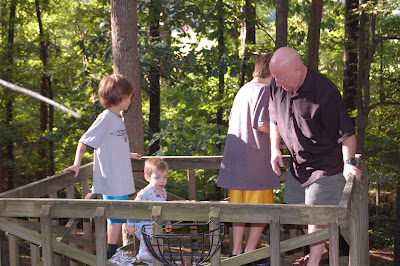 Henry with his cousins & Poppa Bob in the tree house.

I fear that I have failed to document my trip to Louisiana well- actually, I know this is true because the camera hasn't been pulled out in over a week. Amongst visiting with friends & family, guesting at my Mom's book club, and general Henrying, we've eaten good food and I haven't been on but one walk since I've been here (that part is bad. I was walking every day beforehand.)

Incidentally (perhaps), people have commented on my baby belly. It is large. Very large. And people ain't afraid to vocalize that. Once I have a picture where I've (#1)showered and (#2)am looking at the camera and not shoving my face with banana pudding, I'll be sure to post it to show you. Us women in my family have large babies and I plead that I am all (or at least "mostly") baby. At least that's what my Mama tells me to make me feel better.

Time is so funny here. All the activities and routine that I use to mark time in Erie are gone and days fly by in a blur. In some ways, it's such a slow pace of life- I've enjoyed being here while I'm pregnant and loved spending hot southern days with Mama and Henry. The Lord has used this time to encourage and refresh my heart and I am glad.

Adam, El guapo...see you soon! I cannot wait.
Posted by the Jennings secede from the South at 5:30 PM 4 comments:

We are so enjoying our time with family. Mr. Future Doctor Adam "Dada" came in for a visit this last weekend. Henry clung to his Dada and didn't want anyone else to hold him. He just kept saying, "Dada" and giving Adam kisses. It was awfully sweet- I think it made Adam feel really good but also really sad about having to leave again for a short time. We will all be reunited soon enough.
I have loved having family help while I'm as big as Shamou and Henry loves having lots of people to entertain. He is tuckered every day and sleeps like a rock star- which is another plus. I have had some wonderful visits with dear friends and my Mama takes care of our food and care- what a woman. Right now, we're watching Mamma Mia and relaxing after another superb day. I definitely miss my peeps in Erie but life is pretty good down here. Let's all go to that greek island where Mamma Mia takes place, okay?
Posted by the Jennings secede from the South at 6:08 PM 2 comments: 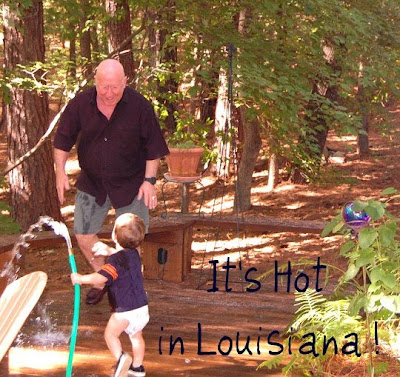 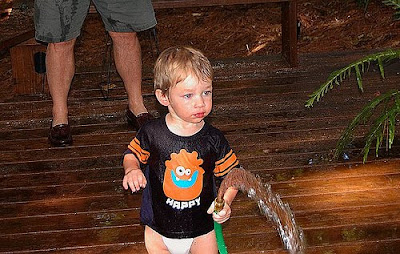 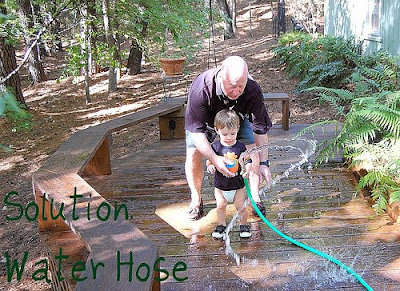 Posted by the Jennings secede from the South at 6:18 PM 4 comments: 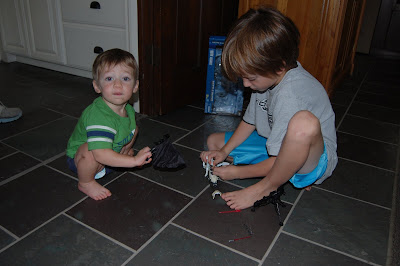 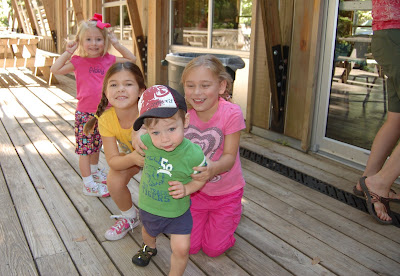 Too Many Girls! Henry and Some of His 2nd Cousins. 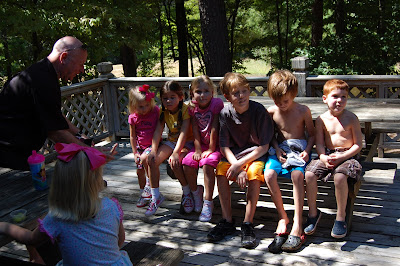 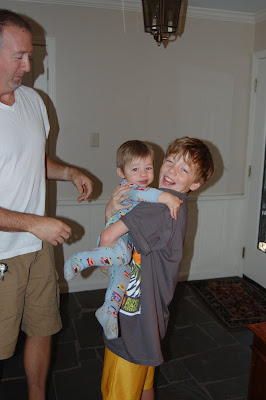 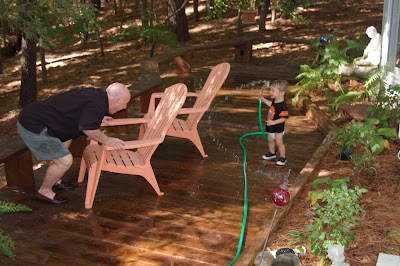 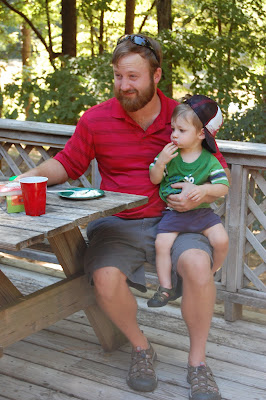 Henry Eating His 8th Serving of Banana Pudding
with His Uncle Gabe. 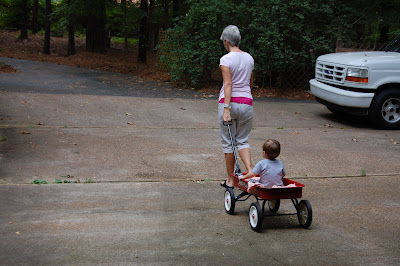 Henry & His Momma Lulu on A Wagon Ride. 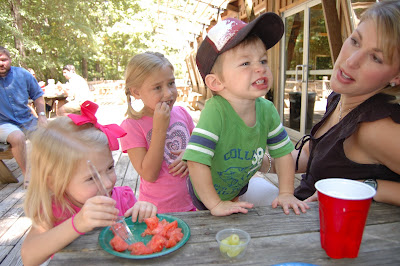 
A big ol' pregnant girl could get used to this.
Lots of family around and always good food at hand. Many hands to help with Henry and he loves the constant entertainment. My girlfriends were in town for a fun lunch & pool visit. We just miss Adam.
My Mom and I made Pioneer Woman's sheet cake for our family get-together. It was yummmm. Mary Lou told me to use 1 cup of brewed coffee instead of the 1 cup of warm water next time for a more chocolatey taste. That's a little free tip from her to me to you.
Many More Pictures to Come!

Posted by the Jennings secede from the South at 6:03 PM 3 comments:

My Mama finally got to see Fearless Henry in action today. We took him swimming and there was a baby pool (in which the water went up to Henry's neck or so) and she got to experience him sprinting through the water, going under on purpose (luckily he holds his breath), and general shrieking and mischief. He also does NOT want any help with swimming. Do not hold me, do not help me. Only if he's under water is grabbing him acceptable. And then he comes up laughing. He wants into the deep pool but doesn't want to be held...which is essentially impossible since, you know, he can't swim.
Next time, he's going to have on his life jacket, like it or not! Also, the day he turns two, I will have him enrolled in swim lessons! At this rate, he'll be jumping off the high dive in no time so he needs to have some swimming skills!
Posted by the Jennings secede from the South at 3:49 PM 8 comments:

We arrived yesterday evening after 3 flight and a short drive. Whew! I awoke this morning to the door slamming and a gun shot being fired. If you read my Mama's blog, you know that she has had some armadillo problems in her garden. Well, that ol' dillo showed up this morning at 4 a.m. and got blown to kingdom come. He now lies in the front yard with four feet up.

Welcome to Louisiana!
Posted by the Jennings secede from the South at 5:47 AM 2 comments: