The (Milk) Maiden Voyage: How Long?

That is what I've been asking lately. When will I wean Henry? He is 10 months now and sleeps well through the night (thank you, Lord!) He's eating 3 solid meals but I'm still nursing him several times during the day (but not nursing him to sleep any longer now that the paci has reappeared in our lives).
I always had the idea of nursing until Henry was one in my head but one is quickly approaching. It just kinda makes me sad to think about not nursing him any longer. AGH! Am I becoming thatwoman that I never thought I'd be? That crazy la leche woman (no offense).
Oh, what to do...what to do.
Posted by the Jennings secede from the South at 5:54 AM 11 comments:

Adam turns the big 2-7 this week (Thursday, to be exact). I am making his favorite dessert, Peanut butter Pie...what he always requests for his birthday.
MIX:
1 3/4 cups of creamy peanut butter
8 oz. cream cheese
1 1/4 cup of powdered sugar
(you can alter these depending on how peanut butter-y you want it...we like it super peanut-butter-y)
FOLD IN:
12 oz. cool whip
Place in either two oreo crusts or a graham cracker crusts. Drizzle chocolate syrup over the top. Freeze for at least 5 hours.
WHALAA!
Posted by the Jennings secede from the South at 4:41 AM 1 comment:

This has been a couple of days of bad emotions bubbling over the cauldron edge of my existence. I have been quick to anger, critical, and brimming with malice. It's like waves of hostility rolling off of me. For example: Why can't I see a beautiful girl and be like, "Hey...she's beautiful!" Instead, I'm critical: I think that she's vain...I think that she's consumed with being skinny...I don't want to like her. I'm insecure, I'm a big ol' load of crazy.
I am thankful to have a husband that I can unload on and who will pray with me. I am thankful to have girlfriends with whom I can have total disclosure. I am thankful for a God who is kind enough to let me see my need for Him, who breaks off my false comforts so that I can be satisfied and healed in just Him. And I'm thankful that today is better.
Posted by the Jennings secede from the South at 4:25 AM 6 comments:

I was a little smug, perhaps. You see, the last time that Henry used a pacifier was when he was 4 months old on our trip to the South around labor day. He had never really been too interested in his pacifier so we just nipped it in the bud, no problem!
I was proud.
UNTIL, we got ready to fly to the south in January. I brought a couple of old pacifiers that I found. My thought was that it might work to entertain him in case he got fussy on the flight. I was trying to be a nice fellow human, right? Well, on the way down, Henry wasn't interested in the pacifiers but on the return flight, he became addicted.
Now, he finds pacifiers under the couch and shoves them in his mouth. I'll be honest, they seem to make him happy! Also, they are miraculous for putting Henry down to bed...I could put him down wide awake with a pacifier and it wouldn't be a problem.
But, geez, Louise! He is almost 10 months old! Why now? STELLA! I think we're going to have to nip it in the bud before it gets too serious but it'll be not fun.
Posted by the Jennings secede from the South at 3:25 AM 6 comments:

....of sandwich making!
Lately, I have been on a kick. A sandwich kick. Not since fourth grade when my parents got a "Pocket Maker" have I had such enjoyment or utilized such creativity during the sandwich making process.
Here is my latest, greatest sandwich recipe
BREAD (honey wheat)
zesty horseradish mustard
sliced avocado
cajun turkey
jalapeno cheese
sweet bread & butter pickles
kansas city bbq sauce
BREAD (honey wheat)
grilled in a scorching pan with 1 t. of butter to perfection...whooo wheeee! I have had this sandwich 9 times in the past 9 days...seriously. Adam has had it 8 times.
Any other favorite sandwich recipes?
Posted by the Jennings secede from the South at 10:11 AM 10 comments: 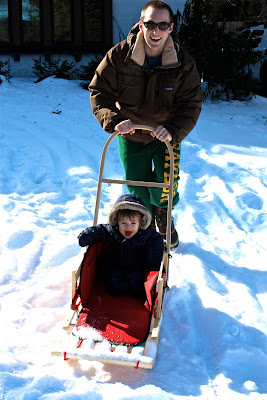 This picture actually has nothing to do with my posting topic for today but it sure was cute.
Friday night, some friends & Adam & me threw Freeland and Brooke a big, surprise baby party!
FIRST, We had sent Brooke a fake invitation for a baby shower on Sunday, February 21st.
THEN, we told Freeland that he was going to help us surprise Brooke on February 14th by getting her to our friend Sarah's house for a shower.
THEN, we rode with Brooke & Freeland to a "Valentine's Party" on Friday night BUT, in reality, we had over 30 guys and gals ready to sing, "For He's A Jolly Good Baby" when they hit the door. It was a blast and they were surprised.
It was definitely your non-conventional baby shower. We played blindfolded pictionary, made Freeland taste baby foods and guess the flavors, had an ice chest full of brewskis, and made a blindfolded Brooke crawl on the floor and guess which leg belonged to Freeland. It was a fun party and it was cool to see how many people love Brooke & Freeland and wanted to support them at this non-shower shower.
Adam was definitely Dad of the Year and entertained and chased after Henry for over three hours at the party while I bossed everyone around and ran the games segment of the evening. It was a great shower and I worked with two amazing hostesses- Christie and Sarah- creative, wonderful gals.
Posted by the Jennings secede from the South at 7:29 AM 4 comments:

Welp, we braved the snowy conditions to head out to Henry's 9-month appointment (we were almost a month late, but hey, we were in the balmy south when he turned 9 months old.) We were surprised to find out that he is 29 inches (59%) and only 18 1/2 pounds (10th percentile for his age, and only 4th percentile for weight for his height!) Adam & I were both big ol' chubby babies, so what gives?
The doctor said that he's fine. I think his low weight has something to do with the wiggle worm in him that won't stay still long enough for me to wipe his bottom after a diaper change. The kid must crawl five miles a day. Also, his head is in the 70th percentile but that still can't compare to my nephew's heads (1 in the 99th percentile and 1 off the chart).
Posted by the Jennings secede from the South at 10:18 AM 5 comments:

I can tell that we are entering into the Chronic Back Pain season of life. First of all, scenes like the above pictures depicts...secondly, the bending over to assist our son in walking by holding onto his hands...thirdly, the jutting out of a hip to hold a 19-pound baby. Maybe I should get one of those inversion tables like on that infomercial with the brawny older man.
Posted by the Jennings secede from the South at 7:52 AM 6 comments:


We are back from our 4-week stint in the warm (er) south. After not having cooked a meal or vacuumed once during that span, we went to town on our house and grocery store yesterday...like real grown-ups.
Adam had a family medicine rotation near Fort Worth and Henry & I split our time between there and Louisiana.
It was an incredible month and such a wonderful opportunity to spend lots of quality time with our families. I'm so glad that we went. We weren't ready to leave but now that we're back, it's nice to be in our home (with Powers) again.
By the by, a huge shout-out to Brooke & Freeland who watched Powers for the entire four weeks for us. Talk about dear friends...
Posted by the Jennings secede from the South at 7:21 AM 1 comment:

I expected for my son to get bumps and bruises from crawling around, pulling up on everything, cruising along the coffee table, etc. But I didn't expect for baby-raising to be so rough on me! Henry has taken to a few painful demonstrations of his love, lately. For example:
He bites my neck or shoulder when I'm holding him. He has 5 teeth now, so it hurts.
When I'm nursing him, he kneads and pinches my skin on my neck or chest. I have several red marks where he dug his little nails in too hard. He used to grab my nose and mouth when I nursed him but now we've transitioned to the neck knead.
It's probably normal but I have had quite a few bite marks and red pinch marks on my body.
Posted by the Jennings secede from the South at 7:46 AM 4 comments:

Henry is already over 9 months old and I am beginning to wonder about weaning. How do you do it? We have advanced to breakfast, lunch, and supper with solids and sometimes snacks but I'm using pumped milk for cereal at breakfast and supper, usually. But, I still am nursing several times a day and I'm wondering what strategies are out there for weaning. I really have had a great experienced with breast feeding but as we approach the 1-year mark, I am curious how you ever stop and I want to have a plan so that we can have a smooth transition when the time comes. (Prayerfully smooth....)
Anything that worked for you? Anything that did not work for you?
Posted by the Jennings secede from the South at 7:21 AM 5 comments: