Mama is in the process of weaning my one-year-old. With Henry, I was encouraged by the bag doctor to wean him because I was pregnant, so Henry had his last nursing-feeding at 11 months.
However, with Elliot, I am not pregnant and not as motivated to wean. Well, until he got his 4th tooth in this week and I am a little more motivated now. I have been dropping a feeding a week. On Thursday and Friday, I just nursed him for bedtime (and yowza- going from two feedings to one is painful! By bedtime, I was about to burst!) But this morning, when Elliot woke up at 4:15 and wouldn't fall back asleep, I whipped out the milk express so I am back at two feedings a day.
I know that Elliot will be fine but I'm still a little sad about weaning this kid. I love that time of rocking and nursing and having his little hands on my face (or in my mouth, nose, or pulling my earrings...not always as fun). Breastfeeding has been an incredible experience for me and I'm so blessed to have been able to nurse this long, thank you, Lord!
Posted by the Jennings secede from the South at 10:05 AM 3 comments: 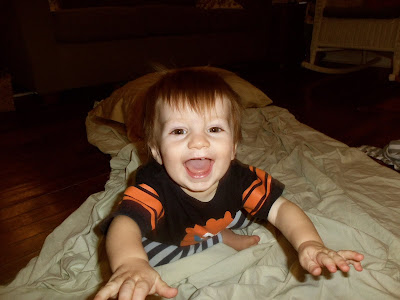 Elliot At One:
almost 22 pounds (he's actually lost weight since the beginning of the summer. probably a combination of moving more and not nursing as much)
has exactly 4 teeth and about 10 on the way, it seems. He got his teeth a lot later than Henry did!
loves to walk around with someone holding his hands. He hasn't taken his first step yet but crawls to get around.
has learned to scream and squeal to get his way.
knows how to charm people. 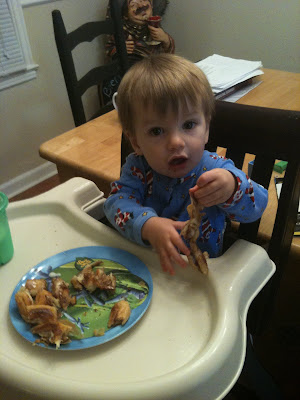 loves his big brother but is learning to stand up to him. (see above: squealing or screaming when things don't go his way)
loves clapping his hands and raises his arms up high to sing, "Daaaaaaaa!"
loves playing the drum.
Favorite Food: Yo Baby blueberry yogurt.
Loves people but is definitely a Mama's boy right now.
Sleeps through the night (until at least 5 a.m. and takes one nap a day usually- plus sometimes one additional cat nap in the morning in the stroller or car) 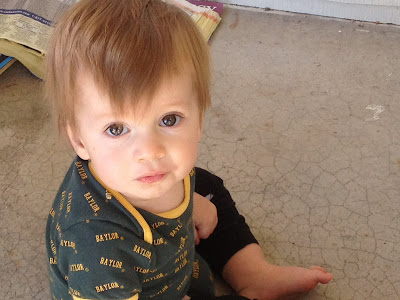 Posted by the Jennings secede from the South at 9:38 AM 2 comments: 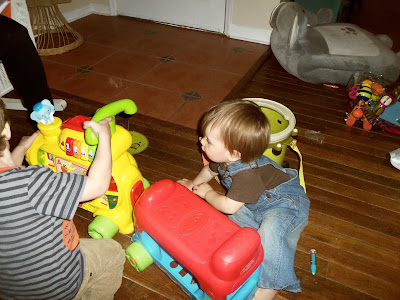 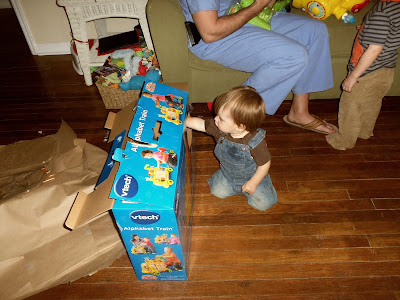 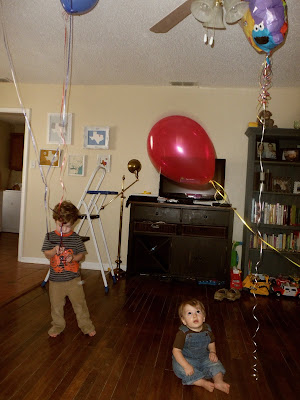 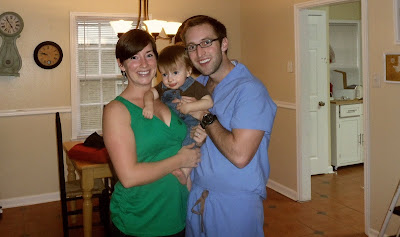 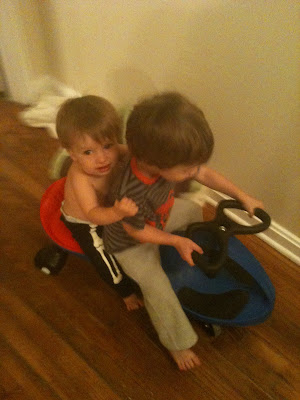 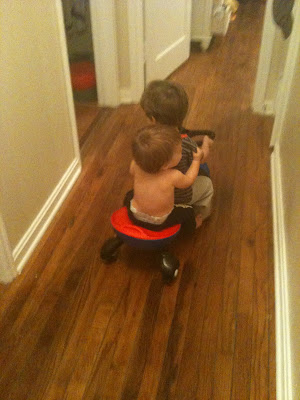 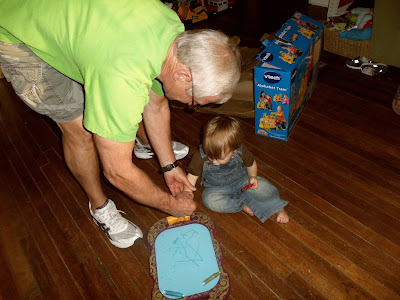 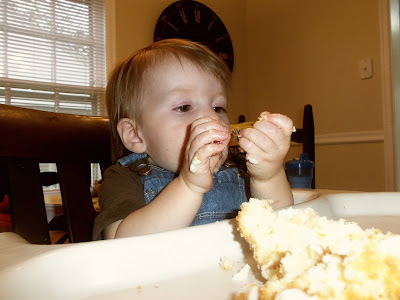 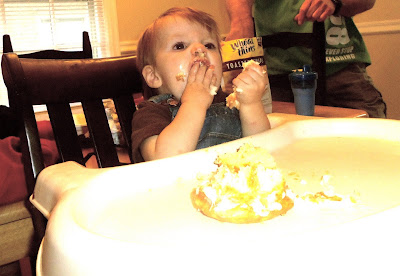 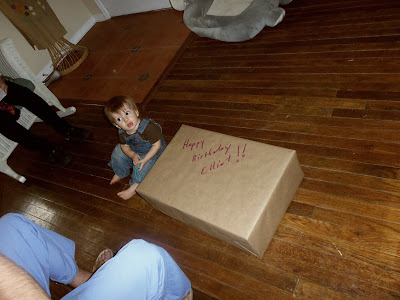 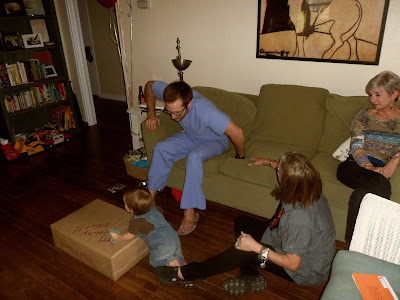 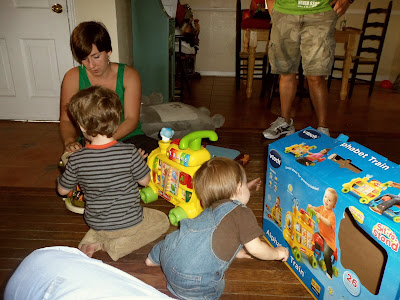 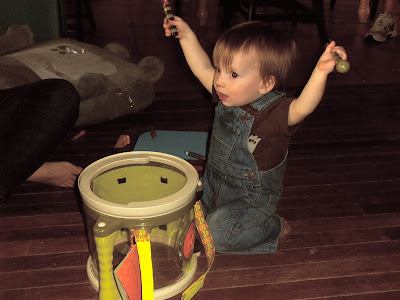 With the combination of a tiny rent house and Adam's crazy residency schedule, we decided to have a little get together on Adam's night off this past week. Adam's parents came over and my mama drove in and we enjoyed hanging out and celebrating Elliot's first year of life! I was feeling a bit guilty since Henry had big blowout parties for birthdays one and two but I don't think Elliot minded the small celebration and we did what worked for this year!
Happy birthday to brooooodder! Happy birthday to Henry! Happy birthday to Beaaaar! (sung by Henry).
Posted by the Jennings secede from the South at 3:41 PM 3 comments:

Getting weepy tonight over the fact that my baby, my second born, will be one tomorrow. Elliot Hayden Jennings, my little smiley man.


What a year it's been. Elliot, you are so dear to me. You are a precious gift from a loving heavenly Father. I love you!


(This post was written last night- Elliot is one today 10.25)
Posted by the Jennings secede from the South at 6:25 PM 4 comments: 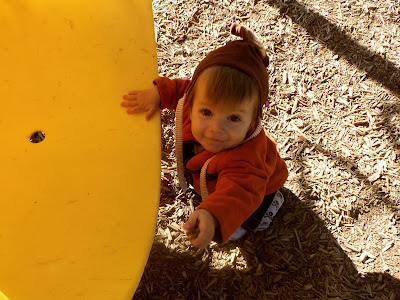 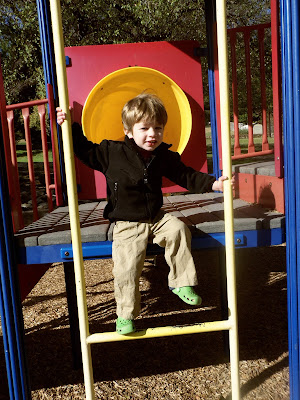 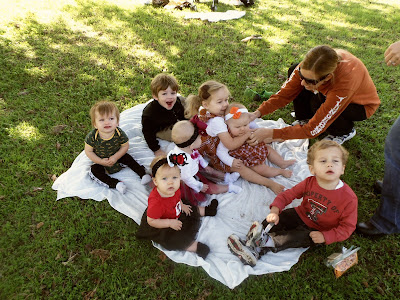 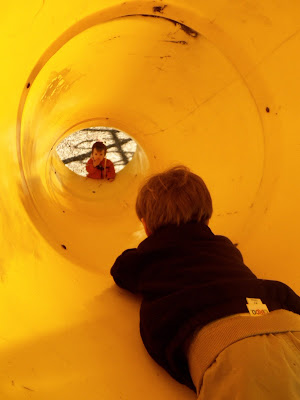 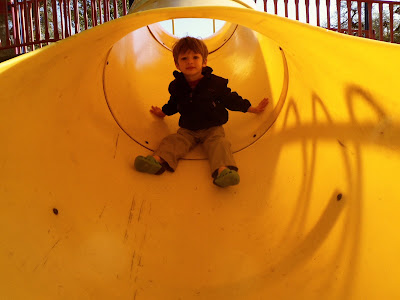 I am currently listening to Henry yell/sing the lyrics to The Wheels on the Bus and his ABC's in his crib where he is avoiding his nap.
Posted by the Jennings secede from the South at 9:55 AM 2 comments:

There are some people out there that just maybe, sometimes, when they go to their ten-year high school reunion, they might be overcome with nostalgia and think it's a good idea to hop on the mic and sing some great 90's music. 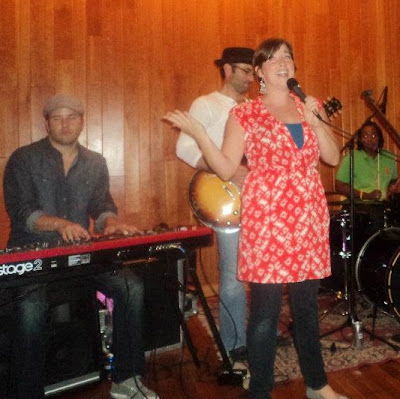 I mean, I don't know anyone like that. I was just saying, though.
P.S. This will probably happen at my sons' weddings, too. Brides beware.

Posted by the Jennings secede from the South at 5:28 PM 5 comments:

I'm still working on getting the invites out for the blog to go private. I may create a blog annex or something of the like because blogger limits the number of invites that you can give out for a private blog so, I may create a Jennings Secede Blog, Part 2 and just copy and paste my posts from here on out there.
In case you don't follow me on twitter, I received the new Urban Outfitters catalog this week. (Why? I haven't purchased anything from there since Brooke Ackley got married four years ago. I got her a nightgown.) Anywhoos, the clothes...awful. I'm sorry, Young People of the world. 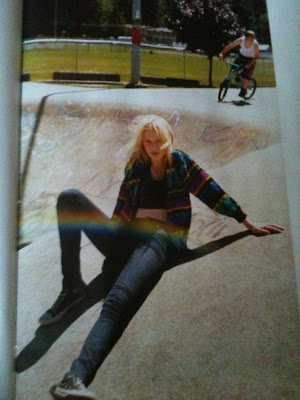 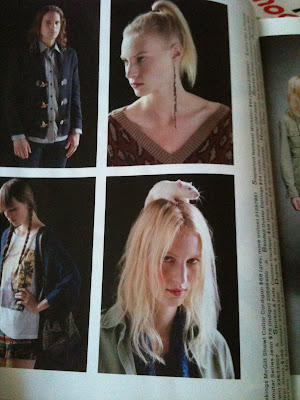 Why does this girl have a mouse on her head?
Posted by the Jennings secede from the South at 8:40 AM No comments: 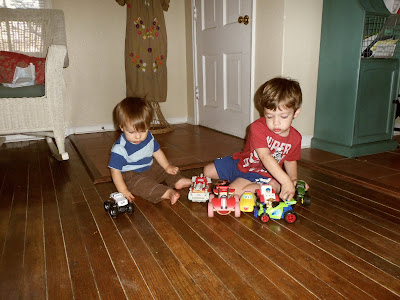 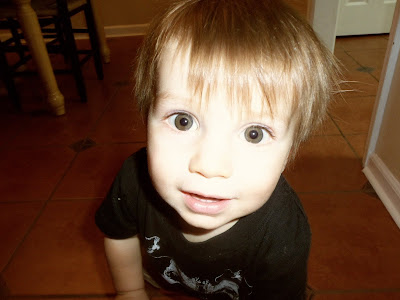 First off, I am so touched that you folks want to check in on our family and keep up. Blogging has been a great form of encouragement for me, thank you. I am excited about sharing more on the blog and not having to worry so much about what's okay to post and what's not, especially when it comes to my kids.
Some of you folks that want to be added to the blog forgot to put your email address on the comment and I need it to add you! I won't publish the comment, so it'll be just me that has your email address. I've listed the names of people without emails below:
Lisa, Amanda E., Ainslee, Briley, Jeff & Amanda, Davida, Court, Amanda T., Cynthia, Sarah S, Jackie & Nancy
I think everyone else put theirs on the blog.
Ok, that's all! See you on the other side!
Posted by the Jennings secede from the South at 6:48 PM No comments:

After some discussion, thinking, pondering, praying, and the like, we've decided to make this little family blog private. It just seems like the right thing for right now that's on both mine and Adam's hearts. This blog has been an amazing source of sharing and venting and support and community for me, especially while we lived in Pennsylvania. But honestly, I don't enjoy doing it anymore and it seems like a duty...well, a duty that I'm blatantly ignoring and then I feel guilty and then I shame-eat a pint of Ben & Jerry's (just kidding). So, I am going to just basically make it a picture dump now with tons of pictures of the boys and really detailed information about their development and growth.
So, I made it private on Sunday night but I received a little feedback from friends who'd like to still see the blog.
Therefore, if you are still interested in subscribing to this blog, drop me a comment and I'll drop you an invite in your email! I'll probably change the settings to private this weekend.
Incidentally, I am so not offended if you are not wanting to subscribe to the blog, so please don't feel like you need to comment on this post. And if you do want to subscribe but you don't want to leave a comment, you can email me or facebook me.
Love to you and yours and thanks for caring and reading and being downright incredible!
Except for you anonymous commenters that leave mean comments...to you, farewell. And, maybe take a handful of chill pills.
PS- I won't publish the comments so that your email addresses will remain private!
Posted by the Jennings secede from the South at 10:19 AM No comments: