Am I A Distraction? 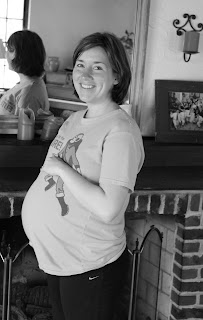 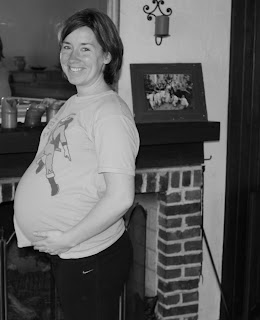 These are not the best pictures as Adam and I were about to take Powers on a walk and the t-shirt doesn't really work well with the baby belly. At least it fits....kinda. 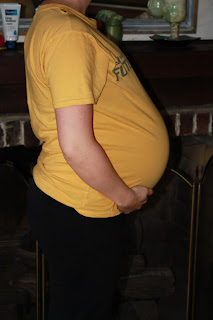 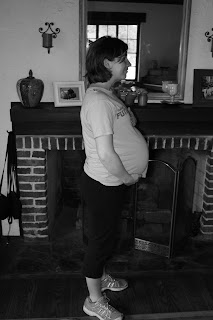 Adam is on his final unit for medical school right now- Psychiatry.  He has a more flexible schedule on this last system and so he didn't even have class today.  However, I think me being home is kind of a distraction.  Currently, he's pushing the baby stroller around the living room popping wheelies.  Oh well, we're having fun at least!

I hope y'all had a happy easter.  Powers did get a little sick last night after eating the three dozen oatmeal chocolate chip cookies that he found on top of counter while we were at church.  (They were made for our easter lunch with friends yesterday afternoon...good thing I had another dessert in the freezer.)  I had used milk chocolate chips and so we looked online and found out that the toxic dose of milk chocolate is 1 oz. per 1 lb. of body weight- so we were okay since I only used 14 oz.  but Powers did drink a ton of water yesterday and then puked all over the wood floor in the living room last night.  That was special.

Doctor's appointment tomorrow so we'll see if Henry is coming round the mountain or not.  My gut tells me probably not yet.  It's not that I'm so antsy and not enjoying my time beforehand or anything...it's more that he's getting really big and the doctors have said that he's a big boy and so then it's a little scary to think that the longer he stays in there, the  more of him there is to push out.  The ship's too big and the bottle is too small, ya know!

My friend Lauren brought by her son, Will, today and Powers was very interested.  He sniffed Will's diaper with enthusiasm.   He was very excited and pretty wound up and bouncing around with the baby here.  Hopefully, when it's Henry, he'll get to used to him pretty quickly.  We plan on taking Powers on lots of walks that first week or so and getting him really tuckered out.
Posted by the Jennings secede from the South at 11:43 AM

You look great! It's such an exciting time and it does show that you are enjoying it. Love the name Henry.

Ahh you are so dang cute! I could just squeeze ya! Little Henry is pretty content in his little nestegg. Hope you are feeling great. You had me rolling with the "special" throwup.

Ok-he looks low and I definitely see that little bottom sticking out on the top-SO-looks like a "Go" to me. Wait until Thursday-PLEASE!

oh, aren't you too cute!! psychiatry...how coincidental!! perhaps adam can "practice" on you!! i am sure power's throw up is much yuckier than anything henry produces, so it'll be a breeze from here on out. yeah, right!! you must be going stir crazy...people tell you to get your rest now, but it's not like you can "bank" it...

oh powers! that made me laugh out loud. lola loves to eat anything and then throw it back up. i so feel your pain!

i'll be honest sister... i thought about you ALL weekend and wondered if you were off to the hospital birthing little henry! do you twitter or anything? you have to keep us posted on the e.t.a & baby status. ok, i guess you don't have to, but just know that you are being thought of and you and henry are loved!

You look fabulous pregnant! I hope I look like that at 40 weeks! Goodluck with your birth...can't wait to see pictures of your Henry.

Camille, you have looked fabulous your entire pregnancy! And even in your 40th week you look great!

You are just the cutest pregnant little mom to be ever!!!!!

I know your mom cannot wait to see you in person!!!!!

I can "hear" the excitement in the tones from her blog and E-Mails.

Hang in there....D-Day is JUST AROUND THE CORNER!!