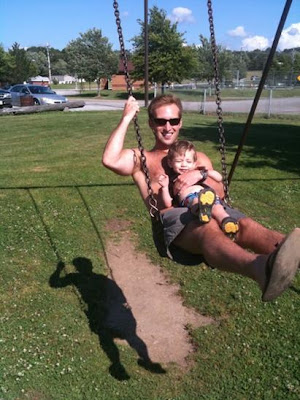 At the park before the infamous road redirection tantrum
I love the age that Henry is at right now- it's a lot of fun and he's so social. But, I also have noticed a serious assertion of WILL coming from that child. Dare I say...tantrums? We are at a total loss at what discipline should look like at this age. He's 14-months old. But he's not in charge, either.
He ain't the boss.
For example, if he is walking towards somewhere we don't want him to head (i.e. a major road) and we pick him up to redirect him, he often does the going-limp-wailing temper tantrum that I didn't think came along until the "terrible two's". He did this at the park yesterday and Adam insisted on holding him until he calmed down so that Henry wouldn't think that he could just get his way (i.e. get down) by throwing a fit. Afterwards, we couldn't decide if this was beneficial or not. Does he get it?
Usually his fits are when he wants to get to something and we won't let him. Or if he wants me to pick him up and I can't at that exact second. (He's a serious Mama's boy).
What works? What doesn't? I feel like we're flying blind and need a strategy. Does anyone have any book recommendations? Words of wisdom?
Thanks, bye!
Posted by the Jennings secede from the South at 5:58 AM

He OBVIOUSLY gets that from the "Other Side" since you were always such a sweet and compliant child. I personally think at this age--there is not much beyond - redirecting after a firm No--BUT THANK GOD-I am WAY past "knowing".

SO glad you posted this question. We are there too!!! I would be very interested in hearing about any helpful books out there. I feel like we also need a strategy NOW so that we can be consistent! This week we have had to deal with some hitting issues and our strategy of holding his arms until he calms down is not the greatest. Like you said, not sure he gets it!

One interesting thing I read about in my Parents magazine is using the word NO sparingly so it means something. They suggested using the "Ouch!" or "Hot!" or "Stop!" if the child is heading towards something dangerous so that it was different than just "no" which we say all the time. Not sure how well it is working yet but I thought it was a good point.

I'm anxious to see what advice people post here, since we have the same issues. Frazier's done this since he was, like, EIGHT MONTHS OLD. Fortunately it doesn't happen real often. I don't know how we got such a willful kid. He does the limp noodle thing and if you put him down just throws himself on the floor. As long as it isn't somewhere dangerous or inappropriate, I just let him have it out and then respond to him only when he's calm. It's embarrassing in public, but it seems to work most of the time. Also we're becoming masters at distraction! :)

We lead that same life...handling the situation the best we know how. I have heard great things about James Dobson's book: Bringing up Boys. I need to read that as well!

I used to think I had an exceptionally strong willed child, but now I think it is just what they all go through. Addy started the tantrums and falling out around 16 months I think and it was very frustrating! She did the same stuff in restaurants and we had just about decided we just wouldn't go out. I have alot of friends and family that just do the time-out thing and at first I couldn't really figure out how to start it, but I saw a stool at a garage sale that says time out and I bought it. We put it in the guest room and at first she thought it was cool and tried to carry it around the house. Then one day during one of her tantrums while I was trying to cook, Josh took her and made her sit on it and told her she had to calm down and I was secretly laughing at this attempt because I knew this was not going to work. To my surprise, she screamed for a few minutes and then Josh went back in (she had not completely stopped crying) and talked to her about it and then let her go play and it worked..I got to cook dinner and she happily played!!!! I read somewhere that sometimes the kids don't know how to get over the tantrum and the time out thing is a way for them to cool down and a way to transition to something else. So now when she throws objects at us (I warn her first) or starts a tantrum we take her in there and let her sit for just a few minutes and it works! It even worked when she refused to ride in the stroller on a family walk. Of course it took alot of frustration from us because we had to stop everything and do the whole time out thing, but we had a wonderful walk after it was all over with. It also works in restaurants..I just tell her she is going to time out and I walk her outside and talk to her and now she will tell me she is sorry and hug me (with prompting) and go back inside and sit down. I am not saying this works all the time and that it will still work next week, but for now it is!! : ) Good luck!!!

im so glad you posted about this bc we are going through this BIG TIME, I had a major discussion with his doc on Monday...glad to know we arent alone in this!!!!

Time out or "talking" (trying to explain what she's doing wrong) is starting to work for Tristyn. Before then, we did redirection (physically placing her somehwere else) or just leaving her to throw her tantrum (i read that in a book) so she doesn't think that the tantrum is getting her the attention she wants. (again, this only works when you are somwhere safe i.e. at home) Call me for more "advice" since I don't want to utter the dreaded parenting "S" word on your blog :)

that's funny how you think he's not the boss! don't worry...your next one be either! haha

I teach special ed and deal with pretty challenging behaviors. There is a book I give to parents called "No More Meltdowns" by Jed Baker. It obviously deals with worse behavior than just growing up and learning, but it helps you understand the "why" behind behavior and how the consequence of the behavior should depend on the "why". Its interesting and you'll start seeing behavior in a new way.

Not excited about the tantrum throwing phase.... Thanks a lot for alerting me that it begins early! joy! lol!
I saved a recipe that you posted a long time ago for Chicken Tostadas from Cooking Light. Finally made them this week & they were fantastic. Thanks for that recipe!

This is my life right now too! My little girl started the tantrums around 16 months. I must say over the last three months though they have become fewer and fewer. I have a degree in child development but it is still so frustrating and sometimes overwhelming in the "heat of the moment!"
Most of the time children are throwing a tantrum to assert their will and/or because they have these big grown up size emotions going on inside and haven't figured out a way to deal with them. The earlier advice about using "no" sparingly and trying to explain the why is really good and very true!
Also, it's good to help children learn how to deal with their emotions. When my girl gets upset, I still use redirection but I also try to help her calm down. Usually trying to hold her tighter doesn't help (in our situation) so I set her on the ground and say something like, "calm down sweetie, take a deep breath." Then I take a couple deep breaths and she will usually stop and do it with me. Sometimes it just takes a good 30 seconds for her to get a grip, but of the time she recovers quickly.
Just remember every kid is different and you will learn what's best for Henry. The most important thing is to be consistent and to not give in and just give him his way! I constantly remind myself "this too shall pass!" :)
Good Luck!