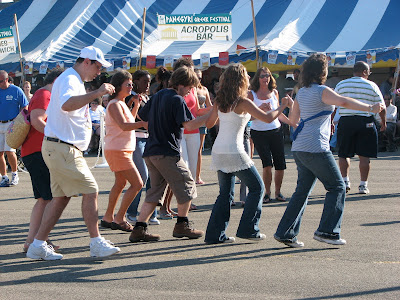 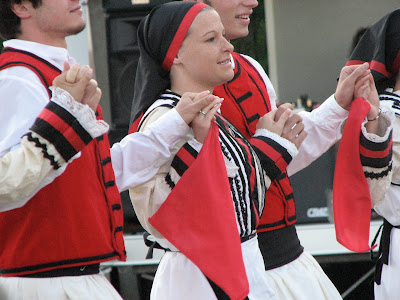 Pictures from Greekfest '07. I didn't quite have time to take pictures this year.
By the time I'd pulled out my camera this year, Henry would've been in Venezuala.
Well, Henry and I have survived our first ER rotation weekend, with Adam working at the hospital. Adam worked from 7a-8p on Friday, 12 a-12 p on Saturday, and 7a til...? on Sunday (It's 8:20 p.m. and he's still not home!). We missed him but we kept ourselves entertained.
Friday & Saturday night we went to greekfest. See, in the past, greekfest has been a time of watching dancers and listening to greek music, eating gyros and drinking a cold one with friends. This year, it was big ol' pregnant Camille waddling after Henry as he sprinted around the kiosks and towards the middle of the performers dancing and into the woods and everywhere in between. I swear, I am going to pick up one of those leash thingies that attaches to a backpack that kids wear ASAP. Henry is a wild man and loves to be going.
Wild man-chasing aside, we had a great time at greekfest and enjoyed seeing lots of people and visiting with our pals. We also went swimming over at River's house, went to the park, and played for hours in the backyard. It was a great weekend but I look forward to next weekend, when Adam is at home and not at the hospital!
I really admire single moms and military wives with husbands deployed. You are my heroes!
Posted by the Jennings secede from the South at 2:45 AM

My husband also works long hrs and travels out of town for 1-3 weeks at a time. We have 2 preschoolers, 16 months apart and no in town family help. I'm here to offer my encouragement to you! Keep a positive attitude. It makes all the difference. I really have just accepted the fact that this is what it takes for him to have his successful career, allowing me to stay home and manage the kids and household. We are a happy family and have tons of fun when daddy gets home as well as when he is working! Sending my best to you...

I agree, those moms are definately heros! The evenings/weekends I have C by myself are rough. You are such a fun mom to little Henry!

Just saw your twitter post on the side... YES 'girl with a dragon tattoo' gets better. I read all three in 6 weeks this spring. As I told my grandpa yesterday, any book that kept my interest while my hubby was in surgery for 7 hours must be a great book because I was just slightly distracted!!!

I would much rather hang out with you guys than be in the stinky old ER!!! You really are the best wife, and honestly I can't imagine having a better son than Henry.

Love your humor and reading your posts! You are doing a great job Camille!

You make me laugh! I know all the hard work and sacrifice on BOTH your parts will pay off soon when Med School is over!!

You are really brave, Camille. I probably would have decided it was easier to stay home....although the food may have lured me there even if I had to chase a toddler. Hope you ate some baklava!!!