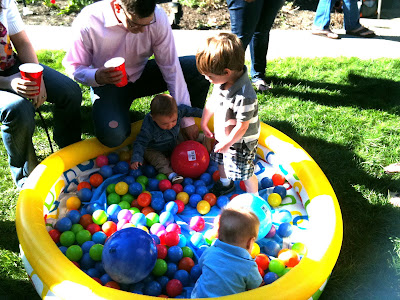 The other day, we were playing in the front yard and a huge bumblebee landed on Henry's shoe. I didn't see it until he calmly called my attention to it. I must've made a horrific face but I tried to shew it away and, when that didn't work, I stepped on it (atop his shoe) and killed it. This kinda freaked him out.

Now, he's afraid of bumblebees- even after calmly reasoning with him about bumblebees being fine, he's afraid. "Bumblebee getchu" can often be heard coming out of his mouth when we are outside. He spazzes out if he thinks that a bee is near him even when there is no bee around.

This morning at the playground, we showed him an ant crawling along the ground. I mean, we did it in a calm, look how neat! kind of way. Now he thinks that bugs are crawling on him and that bugs are going to get him. It doesn't seem like we can reassure him otherwise.

Peeps, this may be a phase but it's pretty foreign to me. Henry has always been a little too brave (like diving into deep water while laughing). How do we respond? Change the subject when bugs come up? Keep explaining that bugs are fine? Just wait for it to pass?
Posted by the Jennings secede from the South at 9:26 AM

oh no! i have no idea! but while you are asking for toddler advice my man's hitting is out of control!!!!!!

Do you have ladybugs up there? Find a fun-pretty bug that won't get you and play with it in front of him.

Tris calls all bugs "ants" and, I suppose, due to her mother's zealous squashing has taken up the sport herself. We cannot just let a little harmless bug be. If we are outside and see a bug, she screams "ant!" and proceeds to run towards it and stomp on it viciously.

Anyway, hope that makes you feel better. Must be a toddler thing.