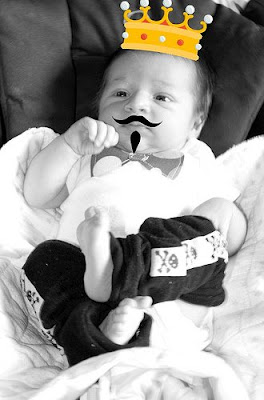 I had my shoes laced up when he stepped through the front door. The past couple of mornings had been rough. Well, make that the past couple of nights. So, I felt like a zombie walking around on Tuesday and Wednesday. So, yesterday afternoon when Adam walked in, I handed Henry off to him and took off on a run with Powers. No walking warm up. After all, it was pouring down rain. But I had to get out of that house and the fresh air and the exertion did me good. See, yesterday it rained all day so we couldn't go on a walk and my car was blocked in by the work truck from the fellows who are working on the windows. So, I was feeling a bit cooped...coupled that with serious sleep deprivation and ba-da-bing, you have yourself a combo for C.M.S. (crazy mama syndrome). The result of which is that I ran the best run I've had since little Henry came along!

Last night was wonderful- we are getting serious (as of my CMS episode yesterday) about getting scheduled and about Henry learning to fall asleep more on his own. He slept like a champ (for him) last night 8:30 to 12:50, 1 to 4:20, then I had to WAKE HIM UP at 8. I don't think I've had to wake that boy up in years, well weeks! Praise the Good Lord for lots of sleep. Now he's napping in his little chair and I am oh, so happy that he is rested and happier. And I feel like I have a goal, some structure, some direction.

On a side note, nothing has made me a more constant prayer than having a son...Lord, what do I do? and Thank you Jesus, he had a good night!

Henry was staring at Powers and smiling this morning and it was really sweet. So far, Powers hasn't shown a whole lot of interest in Henry aside from an occasional lick on the face (sanitary!) but he better get ready because I can imagine Henry will be pulling on those ears and tail pretty darn soon.
Posted by the Jennings secede from the South at 6:42 AM

That picture is so precious!!!

Glad you had a better night last night. I have been joining you in the late night club these past couple of weeks. Will was sleeping through the night until I went back to work and then he decided that he just didn't get enough Mommy time during the day. And we are still working on getting back to the old schedule. Can't wait to see you guys again on the 27th!

I know ALLL about CMS!! Its good to go out and get some fresh "perspective". Joel and I actually HAVE to schedule it in-for both of us!

Oh, and boys and their dogs. I just know Henry and Powers are gonna have a special bond. Our girls like our dog, but when our boys were born- our dog found real love! The boys are constantly all over Daisy, and she just loves it and is so patient.