What's A Dog Gotta Do? 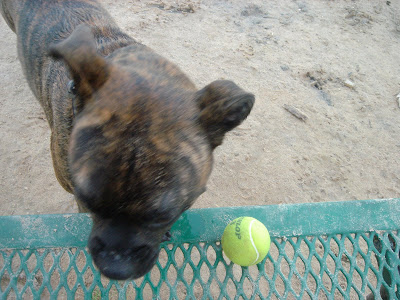 Yesterday was Powers' annual vet checkup/vaccinations. If you'll recall, our first year here, we had quite a scare after he received his first Leptospirosis vaccine (he hadn't had that in Texas). Well, last year they gave him Benadryl beforehand and it worked to stop the unpleasant reaction. However, this year the Benadryl did not work and Adam ended up taking Powers back to the vet to get some more medicine after he puked four times and pitifully lay on the floor. He's fine now and I actually think he might've planned it in order to get some attention- life's sure been different for a dog here the past 11 months.
In other news, Henry has nursed his last boob. I have no idea how to phrase that. He has had his last nursing session? Regardless, he is done. I wasn't planning on him being done so early but last night when he bit me about 20 times within 30 seconds, I picked up on the message that he was sending. Besides being in physical pain, I was a little sad because I thought that I would know the last night that I would nurse him and I would make it special- you know, wear a prom dress and wrap my head in a turban with Enya playing in the background and candles lit. Well, maybe not exactly that scenario but I still thought that I could soak it in a little more. Oh well, it's all gravy.
He was 11 months old on Sunday and that was the last night of his cooperative nursing. So, I guess now he's ready for beer and chewing tobacco.
Posted by the Jennings secede from the South at 4:33 AM

cami you are toooo funny. love you and hope all is well. congrats on baby # 2 on the way. im excited for you two, or you three actually! henry is precious. getting big. being a mommy is so fun...

You DO KNOW that this was all in God's plan!!!He is SO crafty at helping us to avoid difficult emotional transitions.

nursed his last boob. ha! laughed out loud. But i know that is hard. We are at 6 months and i will be sad when it ends here too.

Start him on skoal bandits-less mess.

Oh so bittersweet...the last nursing. Hope the next week or so goes smooth for you.

too funny! i like your mom's comment...anything else might have been too sad and hard. humor always makes things better!! and cigarettes might be easier until he gets his permanent teeth!

love your humor!! round 2 will be here before you know it:).