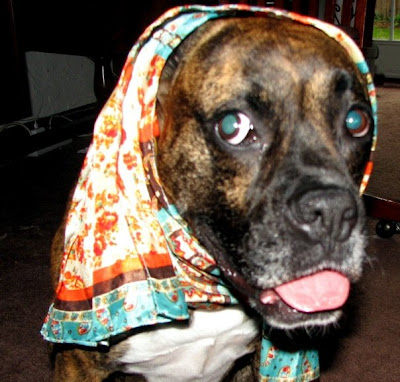 Since we are moving to Texas, several people have asked us about Powers. In case you didn't know, Powers rode down to Texas with Adam in September and has since lived with Adam's parents. (No, that's not a delicate way of saying that he went to "the farm".) Adam, Henry & I were all going down south so that Adam could do a month long rotation at JPS and we brought Powers along to stay. Adam's parents do have a very large fenced-in backyard, a swimming pool, a few other dogs & serious soft hearts for canines.
So, in that way, it is kind of a doggy heaven-squirrel farm scenario.
Well, our rental house does allow dogs but I think that we've decided that we'll just keep Powers out at Adam's folks' house. Yes, we miss him but we've got a handful of babies and our rent house is pretty small for a dog like Powers. Also, I'm pretty sure his life is stinkin' awesome right now. He sleeps on the bed with my in-laws. He swims in the pool. He runs around the backyard. He is the alpha amongst the old dogs. My father-in-law is retired and around during the day to play and give Powers attention. He is loved.
Plus, Powers will be seven in April. He's getting on up there in boxer years and I'm not sure if he wants his final years to be spent getting his tailed & ears pulled.
We are really lucky that we had the option to take Powers to live with Mike & Jule. I think it's really worked out best for him and for our little family, too. But we do have a backyard at our rent house in Fort Worth so hopefully Powers will come visit and we will certainly see him often at their house. Our children will be adequately licked by his stinky-breath tongue. 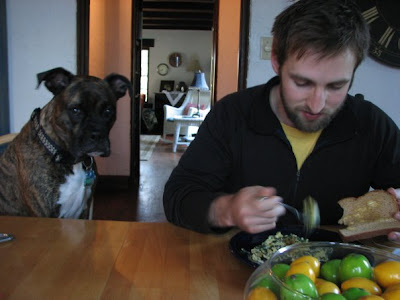 Posted by the Jennings secede from the South at 10:44 AM

Awww, that is very sad but it is also the very right thing. Babies and toddlers don't mix that easliy, I know and I don't mean that they get bitten. I just mean it's hard work. I know because I have had it all and I mean it in a loving way. And someday you an get the boys a dog of their own of course when they are old enough to help take care of one because many dogs need adopted in our world and it's the right thing to do!

i can't wait til you get here!!!!! sending our dog to a better home was the best decision we ever made!