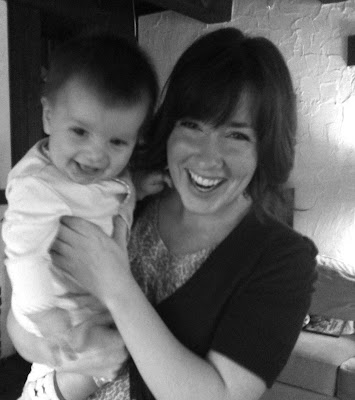 My Sweet Elliot turned six months old yesterday. He is such a sweet & happy baby. He smiles with his whole face. He watches Henry constantly and laughs harder at Henry than at anyone else. That makes my heart really happy.
Elliot is so different from Henry. Henry was pulling himself up in laundry baskets at this age & Elliot is pretty happy that he just learned how to roll from his back onto his stomach. However, he can't quite figure out how to get off of his stomach yet. That's a frustration for him. He'll get there and meanwhile I so enjoy cuddling with my little Elliot- he's like a koala bear all snuggled up against us. In fact, we've been calling him "Bear" around here. (Bubba just had to go.)
I have been slow to begin real foods because nursing is just so convenient. But now that Elliot has begun eating cereal and a few veggies, he seems to be pretty interested in real food. He naps pretty well but nighttime sleep is not so good. However, I'm not having to stick your paci back into your mouth every 45 minutes like I was a few weeks ago so no complaints. (the paci is gone and the swaddle.)
Henry had his 2-year appointment yesterday and he weighs 25 lbs. I'm pretty sure Elliot is really close to 20 lbs. Yep, he's going to be able to defend himself against his big brother. Elliot was such a sweet surprise and is such a delight to us. What an amazing blessing and joy. 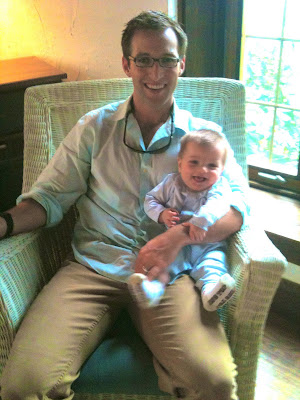 Posted by the Jennings secede from the South at 4:55 AM

That little Bear is so precious! I think he and Austin passed notes on how to be the bigger little brother! It definitely helps out when big brother gets a little rowdy.

what a great picture of you and Elliot! He is such a sweetie!

Where does the time go?? What a sweetheart!!

Do you ever have any trouble with your posts not showing up in your friend's feed? I posted last night around 6:30 and it still not showing up in the feed. It is there though when you click on my blog. Just wondering if you had some insight!