buffett and the coral reefers?

We sadly have no new reflections on Erie. We still like it, sure. But we just haven't done as much local stuff lately. However, in breaking news, there is a key west phest in erie this weekend. hosted by none other than the presque isle parrothead club. yes, its just as it sounds. ahoy! cast off your worries and your cares! now, last year there were performances by Peter Mayer and "Uncle" Jim Mayer. I'm guessing John's brother and uncle? thoughts? the mission of key west phest is to "party with a purpose" they raise a lot of money for charity. AND there's a boat parade. and a prize for the most tricked out boat. ...only those parrotheads. Adam and I are definitely going and will update you with our finds and perhaps a few pictures.

Also, they are auctioning off Two shirts worn by Peter Mayer during a Buffett show AND A drum head signed by Jimmy Buffett and the entire Coral Reefer Band. Brooke, I know you've been wanting those two sweaty Peter Mayer shirts, so I'm getting them for you. Think nothing of it. We like parrotheads. We think they are the highest (class) people we have met.

Anyone heard of usatf.org? Its a website where you can find running routes in your area or route your own running route and then see what the mileage is. Sometimes I like to be in oblivion and not know the actual mileage so that I can pretend I ran further than I really did. But the slightly compulsive side from high school cross country loved it and the fact that I didn't really know where I was going, just turn left on so and so street and right on blah street, you know?

But today on our run Powers started struggling. First he tried to act like he was sniffing something so as to slow down. Then he would blatantly try to stop. I felt like a crazy person, encouraging a dog. C'mon Powers, you can do it! Keep it up! I kept looking around for a water hose on someone's house where he could have a sip, but then I decided that the person needed to be outside if I was going to ask to use their waterhose. In case it was some crazy person who would yell at me for trespassing. I'm not good with being yelled at. But no one was outside or the people I saw outside were busy working on something but finally we came to this house and there were some kids outside. A variety of ages. Hey, i say. Can my dog have a sip of water from your water hose? Sure! Several kids rushed off to get water and brought back a variety of cups, saucers, bowls, and hoses for Powers to choose from. He gulped some water from the winning bowl ( go green! its so soothing. and granola) and then got some love from the children. Gotta love kids. Then we headed back out only to realize we were only maybe 400 yards from the house. whoops.
But he made it and now he's asleep on the floor. 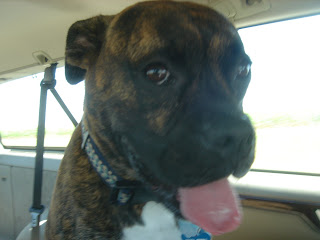 Adam got his desk in today which means that the start of med school is upon us. A week from Monday Adam will begin his journey to becoming a doctor! And I will see substantially less of my husband. We've talked it over, you know, what med school will be like. How we're going to get quality time in together. What color folders should he get. you know, important stuff. But, like most things, you talk, you prepare, you analyze, you seek counsel from others who have gone before you (Thanks jen) . but then really it comes down to the experience. We won't really know what its like until we're diving head first in and hanging onto God's promises. But I'm so proud of Adam, he's going to be the best doctor. And to show how proud I am, maybe I should pack his lunch the 1st day and write a note on his napkin? Kinda like my mom did in Kindergarten? maybe a prize in there?

Well, our number of Erie friends has DOUBLED. from 2.... to 4! whoa there. We met Daniel & josie at church and they are new to the area too! Josie is pregnant with their 1st child & daniel is an air force recruiter! They lived in Alaska for 3 years so are wise in the ways of winter.

Of course, when Adam starts school, he will make a lot of new friends. Then I will slowly and methodically sabotage everyone of those relationships so that he has no choice but to only hang out with me. joke.
adam's parents come in sunday! niagara falls, i'm coming to tightrope across the top of you! 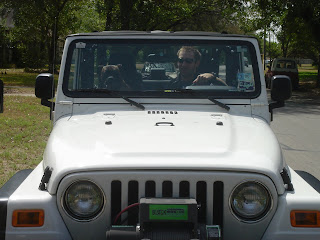 my 2 boys
Posted by the Jennings secede from the South at 8:49 AM

The Erie Bloggers group is meeting on August 14 at 7pm at On Deck.

Enjoying your experiences in Erie, sounds a lot like a wonderful reflective novel. Wish I had that talent. Looking forward to your next posting. Best wishes and God bless.

I shook Jimmy's hand at the superdome with my "shrimp" hands while catering one of his shows. He was nice enough but a bit put off by the golf cart I was driving containing 2 steaming trash cans full of boiled shrimp. He held up the line with his entourage of SUV's underneath the seating and when I casually walked up to his car to see if we could get by a large man almost ended me.