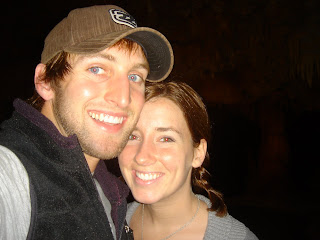 Today I tried to make Magnolia cupcakes. As in, the cupcakes they make at the Magnolia Baker in New York. I found a recipe online and decided to make them before I had read the recipe too carefully. By the time I came home from the store to embark, it was too late to pull back upon discovering the oldtimey and difficult directions. And by old timey, I mean that there was more required than slice and bake cookies. But they were delicious and I'm quite proud.

This week we had our chimney worked on by a father/son masonry business. The father is from Germany and is probably the funniest man we've met in a while. He is at least 65 and flies an ultra light plane around. He has the craziest stories about his ultralight like the time he had to crashland in the forest and also the most pointed and sometimes slightly offensive political views. We like him, we could listen to him all day. He should have his own show.

Trivia: did you know your mouth produces 1 litre (1.8 pints) of saliva a day?

Anyone seen the previews for "ocean of fear- the worst shark attack in history" on discovery channel? Its the show that'll open up shark week this year. Its about the USS Indianapolis, sunk by Japanese torpedoes in the Philippine Sea on the night of July 30, 1945. Of the 1,196-man crew, about 900 sailors, many maimed and burned, were plunged into the water ... and floated helplessly for four days, beset by hunger, driven mad by thirst and menaced by hundreds of sharks.

Um, I'm fairly certain that the initial purpose of Shark Week was to promote understanding and encourage the conservation of sharks. But after watching that preview, I think that I'd be more likely to say, forget the balance of the ecosystem! Die sharks!

Once a week Adam & I go out to eat. This week, we went to Aoyama (Spelling?) Japanese restaurant. It was really good! Our favorite was the Spider roll. The only thing we didn't like so much about the place was that there were a few awkward floater employees. They didn't really do anything besides come by the table and swoop stuff away or ask questions that you had to ask them to repeat because you didn't understand the first time. I hate it when that happens. I've begun to just nodd and smile. Take a risk and say yes, no, or haha. I mean, if I don't really know the person, I'm not going to ask more than once. But other than that, it was good sushi and the awkward swoopers didn't really bother us as much as make us smile at one another and try not to laugh.

As you can see, not a whole lot is going on in our lives right now, so I'm really stretching with material. But Adam's parents are coming for their 1st visit next weekend! We are very excited and think we are going to niagara falls which is quite close! Any other suggestions?
Posted by the Jennings secede from the South at 1:57 PM

Such a cute couple!

oh and PS.. Im sooo inspired by your magnolia attempt, I just went and searched for the recipe & will be doing the same this week. It never occured to me their recipe is out there & Im dying to try them. Just wanted to let you know I am going to copy you.. that is, if its okay. :) LOVE YOU!!

My advice: Don't cross the Peace Bridge at Buffalo into Canada then drive to the falls. Instead stay on route 190, cross over Grand Island, then take the Robert Moses State Parkway to the Rainbow Bridge. But before crossing, park and check out the falls from the American side. Walk over the pedestrian bridge to Goat Island which is between the American Falls and the Horseshoe Falls. There's also a new observation deck on the American side. At the base of the observation deck, you can take a boat ride on "the Maid of the Mist" up the river to the base of the falls (a must for any first timer) You can take the same ride from the Candian side, but the line should be shorter on this side.

When crossing into Canada, you don't need a passport (yet) but take your birth certificate. You can get in without it, but you have to wait while they check you out on the computer.