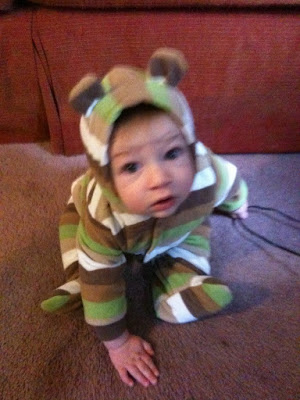 Lately I've felt like I'm letting all these different balls drop. "Dropping balls" was going to be the name of this post but that sounded weird. But you know how people say, "I dropped the ball on that."? Okay, that's what I'm referring to right now.
Like, phone calls that need to be returned. Or packages that I should mail. Or birthday cards that need to be sent. Or summer clothes that need to be put away. I want to do these things but I feel like I'm failing at getting them done. Once upon a time, I thought that by staying at home with Henry, that I would get SO MUCH stuff done. Like, I would have dozens of hobbies and sew and be uber-organized. Not so much, at this stage, anyway. I look at working moms and I think that they have double the challenge- being away all day and then coming home and trying to get time in with your kiddos and get practical around-the-house stuff done. Whew!
All to say, I am dropping a few balls lately (that sounds not right, but you know what I mean.) I realized something, though. When I look back, I won't regret sitting on the floor with my son instead of putting away his 0-6 month clothes (which are stacked on the guest bed, currently). And, hopefully some friends will forgive me for procrastinating on calling them back because it's hard to call someone back if your baby is doing this: MWAHBAH AAAAAAH. And when he naps, I am trying to lie down myself or take care of something around the house or read or something random.
Confession: I am not a super-organized Mom. Starting on Monday, Adam will have a much easier schedule than the past 3 months and, hopefully, I can pick up some balls then. And now I have to go because Henry is sitting in my lap and trying to eat the desk. Happy Tuesday!
Posted by the Jennings secede from the South at 4:07 AM

That outfit is so adorable!

I have had those exact thoughts lately. I am definately not an organized 'super-mom' and feel like so many things are just slipping through my hands. But I'm like you, I'd rather spend my time playing with the little one and don't think I'll regret that one bit :)

Love him. Bring him over to our house right now so I can see him. And please bring him in that outfit.

Also please note that starting Monday when adam is home .. "hopefully, I can pick up some balls then" thats what she said - whoaaaaaa. I couldnt help myself. "sorry"

And Im glad you are choosing to sit on the floor with Henry instead of getting things done. All the other stuff can wait. Good for you.

Dear friend- you are not the only one that feels that way! I think whether working or not balancing your kids and husband and household and friends is a task of monumental proportions!

Have no fear MOM is on the way!

crazy is relative...it is always there, just to what degree...good for you...it will all still be there

That may just be the most adorable picture I have ever seen. Your son is too cute for words!