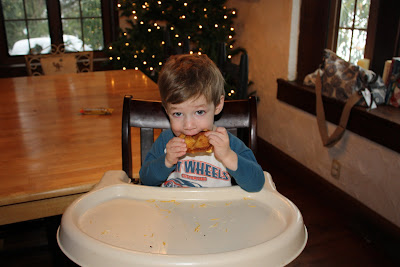 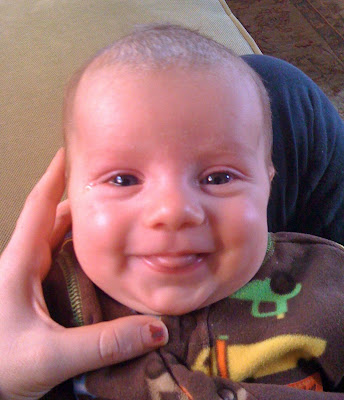 1. Henry eats Rice Krispies almost every morning. We began this tradition while staying with my parents and it has continued. He's so cute sitting in his high chair, shoveling in spoonfuls. Other favorite foods include: black beans, corn, oatmeal to go bars, bananas, apples, yogurt, & grilled cheese ( i love finishing off his grilled cheese sandwiches...)

2. Elliot is the happiest little baby. Henry is silly now but was so much more serious as an infant. All Elliot needs is a little attention and he lights up like a lil' firecracker. He is so smiley and I love it. He makes the sweetest noises.

3. Henry is the skinniest kid. We have to buy pants long enough for him, with elastic waists and then roll, roll, roll them up. We have no idea where he gets this. We were not skinny kids. He eats constantly but also moves constantly.

4. Elliot has cradle cap. With Henry, we tried a variety of treatments: olive oil to loosen the flakes (Oh, his hair was so greasy), combing often, etc. The thing that worked was dandruff shampoo. We are trying that again (be careful around the eyes, though)...

5. So far, my boys love each other. Sometimes when I am doing something with Elliot, Henry will pat Elliot's little chair and say, "Bubba!" as in..."put that kid down...and get down here and play with me." But he really does well with me taking care of Elliot and when Elliot is taken care of, I do my best to get on the floor and play cars, dance around, throw the ball, and read books with Henry. Henry will kiss Elliot and say, "Awwww".

6. I pin Henry down on the floor every night to brush his teeth. He thinks this is hilarious. We both end up laughing hysterically.

7. Exactly two months from today, we will find out where we're moving to in June! Whoa.
Posted by the Jennings secede from the South at 4:12 PM

So thankful I got to spend time with you and your sweet boys. You are doing such a great job! Thanks for sharing your wisdom with me.

Try Selsun Blue. Rub it in, and the comb his hair, then wash out. Probably 2 time should do the trick. Barnes had it and this worked GREAT! Your boys are adorable!! I know you enjoy every minute!