You know, when you marry someone, you often marry much of their stuff. Not in a life-long commitment way, necessarily. But it's something to sort through and debate and compromise on. Maybe it's his neon sign he wants to display in the front window. Perhaps it's Cubs memorabilia that he wants to display on the china buffet.

Well, Adam inherited quite a few lovely items when he married me. His least favorite is girlfriend. 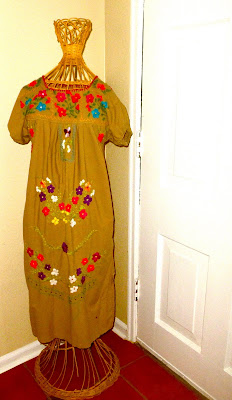 This is girlfriend.
Girlfriend is a wicker mannequin.
Girlfriend was bought before my junior year in college at a thrift shop between my hometown in Louisiana and Baylor (Waco, Texas). My roommates loved her! We dressed her seasonally and for holidays. She was our special friend.

Adam was less than thrilled with girlfriend. Every time we have moved, he has lobbied to have her sold or given away. She did serve a two-year sentence in the basement in Erie but he has not prevailed yet. Instead, she has been used for decoration at many a baby shower and birthday party and I'm pleased to report that she now greets visitors at the threshold of our home.
Posted by the Jennings secede from the South at 6:57 AM

I for one am so happy Girlfriend is out! I love that lady. She was a good friend. If you ever give her away, I will cry.

One of our best finds EVER and thrift shop is being generous---I call it a Junk Shop. Sweet memory of a fun time together!

Where is her stetson? She is a Texan. She should own one.

That's awesome! You guys are hilarious! You have to keep her for sure!945

adam, i think girlfriend is charming. maybe adam can hang up your couples sketches somewhere. =]

oh my gosh i am laughing out loud!

I miss girlfriend! She was always so much fun at our parties and at GG.

Too funny!! You are hilarious.

Girlfriend kinda freaked me out too adam! I gotcha!!
haha
at least she doesnt have a face!!
But she would scare me in the middle of the night!!