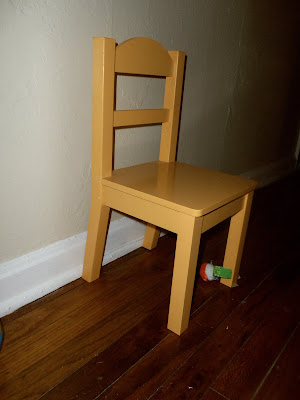 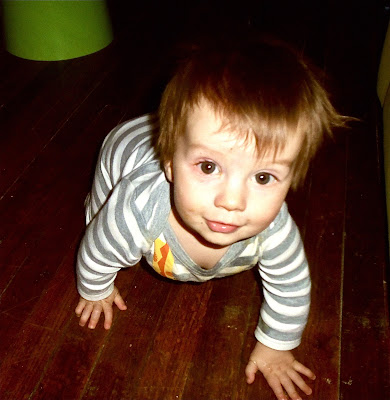 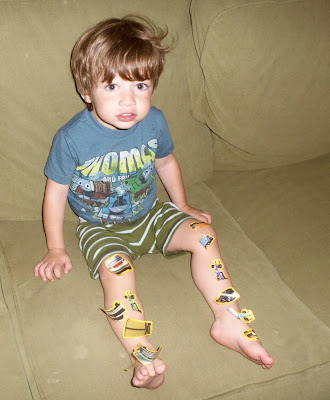 Ever since Elliot learned to crawl and pull up on things, the sibling hostility level has reached new highs. Henry can give his brother a hug and then, moments later, when Elliot pulls up onto the train table, Henry will push him down with an ear-piercing shriek. Most times that Elliot is crawling towards toys, we hear "Aaaaah! Brother! Mama pick up brother!" (yelled with the same ear-piercing shriek). Several times, Henry has stomped on Elliot's hands while Elliot is crawling towards a toy. That is neat.

Needless to say, our timeout chair has gotten a lot of usage lately.
Posted by the Jennings secede from the South at 10:26 AM

try a bean bag for a time out chair. it could help henry regroup. but probably the thing that will help the most is when bear can take him down.

Ah! We're going to be there soon too...I can see it coming already! (Not that we don't already frequent the time out chair!)

Also, I am needing to re-babyproof the house!

The Bells have a great video of Clint unwrapping a birthday present and Stephen stealing it from him to play with it. I think this is normal boy sibling behavior! :)

On a brighter and cheerier note-that picture of E looks JUST like his sweet Momma. LUCKY BOY!

Girl we used a chair so much that we now have a "time out clock" mat. Fun times. And your babies are too precious!

Jim had time out chair for me when Josh and I would get into it...hahaha. Seriously, I never had the sibling stuff to deal with, but you will work it all out lovingly. Lucky little guys.