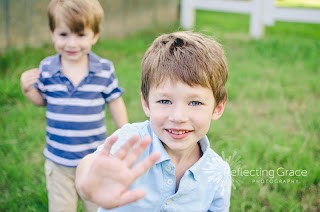 Henry & Elliot have been sharing a room for a few months now and, well, it has been an adventure.

Tonight, about 10 minutes after bedtime, they were found in their closet with all of their blankets from their beds.  They had a pile of books and Henry had pulled on some jeans.  When asked about where his original pants had gone and if he'd taken them off, he replied that they had just slid off.

Another night, I walked in after hearing the sound of train tracks being thrown against the walls and manic laughter.  Train tracks were removed and now there are basically no toys in their room.

Some nights they jump from bed to bed.  Some nights they roll around on the floor.  Sometimes they are in the bathroom.  They almost always make some kind of weird noise and they laugh a lot.  Bedtime used to be a lot simpler with separate rooms but we're giving them some good material for reminiscing one day.
Posted by the Jennings secede from the South at 7:00 PM