(Disclaimer:  The name has been decided.  We are not asking for your opinion {unless, of course, that opinion is, "Yes!  I love it!" }  So, we'll thank you kindly to keep all negative and unhelpful comments to yourself.)
So, we haven't intentionally withheld the baby name from the blogosphere.  On the contrary, Adam and I have shared it with many family members, friends, co-workers, and grocery store check-out clerks!  Our little guy is going to be: 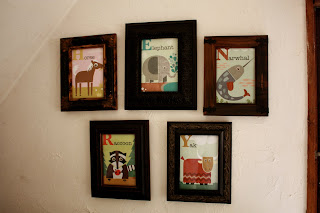 behind the crib (not much wall space due to the vaulted ceiling)
Henry James Jennings
to be more specific.
Adam really named Henry and, although I helped and I love the name, we thought it was really cool(for us) that Adam got to name our son.
Henry is Adam's Grandpa's middle name.  Adam's grandpa was an internal medicine doctor and spent lots of time with Adam when Adam was a little boy (Also, Adam is his only grandson).  He would take Adam on rounds at the hospital with him and really fueled Adam's love of medicine. Also,  Adam's grandpa is also extremely generous and insisted upon buying my engagement ring when Adam got ready to propose.

Henry means Home Ruler.  We are praying that he will be a man of influence whom God uses to call out and raise up fishers of men.
James is my mother's maiden name, my father's middle name, and my brother's middle name.  It is also the name of James, one of the twelve disciples and the brother of John.  He was one of only three apostles who saw the transfiguration.  He was martyred for his faith in the book of Acts.  Also, James is believed to be the name of Jesus's brother.    This James was one of the people that Paul describes as to whom the risen Jesus revealed himself (1 Cor 15).  Paul also lists this James as one of the three pillars of the church (along with Peter and John).

We pray that little Henry James is intimate with the Lord and a boy filled with joy and laughter and is steadfast in pursuing eternal things.  We hope he places all his trust in the Jesus and is a man knowing peace.  We can't wait 'til he's here! 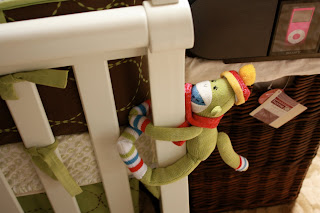 This is one of our favorite gifts. It's a sock puppet monkey from my Aunt Barbara. Jo-Jo is his name.
Posted by the Jennings secede from the South at 10:49 AM

I love the name Henry!

LOVE IT!!! Henry is a great name and I am partial to James.

So NOW we are free to "Tell"? Well truthfully just like you we have been "telling"-they just had to ask. (love the wall)

What a nice strong name. I cant wait to see his face to fit the name!

You know, our Dylan's middle name is James. It naturally flows when Im yelling "DYLAN JAMES!!" when he is doing something naughty!

Now imagine, "HENRY JAMES!!" in the future..but wait, Im sure Henry wont do anything naughty.....

James is a wonderful biblical name...however...Henry will surely turn to Hank. Faghetaboutit.

what a perfect name for your boy! i love the rich tradition and thought you put into your name. i tend to LOVE traditional names more than trendy names and think about how silly all those trendy names will sound in the high school locker room one day.

also, great idea with the frames and the letters. i've never seen that before.

I love the name Henry James!! It's such a strong, smart name, and I love that there's a story behind it. I can tell he's going to be a blessed little boy!

Very sweet Camille. I do love it!

precious angel!! we have been out of town, so i've been catching up...yes, it does seem you may have entered the psychotic phase. come on in, cousin, the water's warm. mine came and never left!! you are a hottie!! the name is precious--can't wait to get my hands on him!!!
don't know what your job future holds, but i saw a posting in erie for a rep...

He led more people to Jesus Christ than any pastor in any church.
(he didn't talk of being Christian; he lived it).

He was in International Sales and a Christian mentor to me.

I travelled with him, and saw people come up and make the most astounding claims to him, for they too, met Christ through him.

You have chosen wisely.
A name becomes a destiny!
Our community of Erie, PA is blessed by your choices.

Geez louise...you make me feel bad. Why did we choose the name Tristyn? We liked it. whoops.

Also, it appears from the FEW photos you have posted that the nursery is coming along great- when is the big reveal to the blog world PUH-LEASE!!!???

I found your blog through Brooke's. I have to say, I love the name and your nursery is looking mighty cute!

LOVE it...very sweet. I love how the names all flow together...

I do like the Baby J name. Wonder if we can call him Hank? Too bad other folks don't carefully consider their children's names! You know what I mean.

YYAYAAAAYAYAYAYAYAYYA. I can finally say HENRY and not just Baby J!