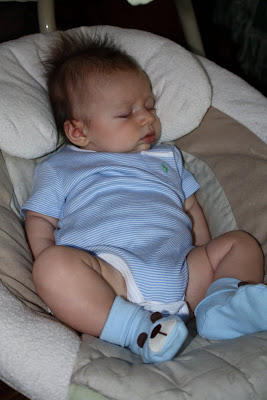 Flying with a baby in tow is an adventure. However, everyone was so kind and people are quite accommodating when you're carrying a tiny tot. I met a lady with a 3-year old on the flight down to Florida and she told me that the stress of having an infant on a plane is nothing compared to when your 3-year-old is kicking the seat in front of him. People always offered to carry things for me and asked me if I needed help. A guy in the Atlanta airport had been bumped to 1st class on the flight back and offered the seat to me & Henry- how nice is that? However, it turns out he needn't bother because...

My flight back from Florida was cancelled and, subsequently, I was bumped to first class on my 2nd rearranged flight. Nice, right? Not to sound ungrateful, but of all the times that you could get bumped to 1st class, when you have a baby is hardly the best time. It's like, "eeeeh, um, sorry people that paid $1,000 per ticket but excuse my sweet son's fussing on this late night flight."

Henry actually did pretty well and I am proud to say that I have now changed a diaper at 35,000 feet (or however many stinking feet it is). He let go of a big poop (loudly...again, heeeey first classers) and so I was going to go change him in the front of the plane by the flight attendant station because, you know, first class passengers get to do whatever they want, riiiight? But the flight attendant told me that there was a pull-down changing table above the toilet in the bathroom. Right, in the teeny-tiny airplane bathroom- did you know that? It was hilarious, the two of us crammed in that space trying to wipe that booty (and change his blown-out onesie).

We must've walked 4 miles in the airports with Henry in the baby carrier. He did pretty well and it well worth it for us to see my family in Florida. It was a wonderful trip.
Posted by the Jennings secede from the South at 1:15 AM

I say poop on the wealthy first-classers who think theirs doesn't smell!

I can hardly get MYSELF into those tiny br's much less stand up and change Mr. Henry's Major Blowouts!

glad you had a great trip and thanks for the laugh! He's getting cuter and cuter!!

haha! you're that lady on the bathroom who is 'stinking up' the only bathroom for 200 people. just blame it on the kid! love u!

I totally stalk your blog all the time and love seeing pics of little Henry! He's adorable. It was good to know you had a reasonably pleasant flight with him...I was wondering how it'd go. We're having our baby tomorrow and my parents will be moving to Belgium soon so we'll definitely have some extensive flying time with our little one! Thanks for testing the waters for us! Changing table in the little bathroom...note to self. :)
-Randi Anderson

glad you made it back! i missed you and seeing pictures of little henry. every time i drag my purse and carry on through an airport i try to imagine what it would be like with a kid. last time i had 10lbs of COW paraphenalia with me. I don't know how you do it=)

fly all you can before he's 2!!! can't wait to see y'all in september! he's precious!

I'm glad to read your airplane diaper-changing adventure. I foresee that in my near future (a little after the babe is born in Oct, though). I hadn't even thought of the predicament until now. Eek! Sounds like Henry and you handled it like champs, though. :)

I recently came across your blog and have been reading along. I thought I would leave my first comment. I dont know what to say except that I have enjoyed reading. Nice blog. I will keep visiting this blog very often.