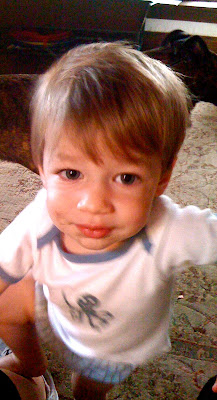 Blueberry face traitor.
We have this picture album of photos of Henry from birth til about 8 months of age or so. Henry wants to look through it. He doesn't say anything except for every picture of Adam, he points to and says, "Dada!"
I'll point to pictures of me and say, "Who is that?"
Silence.
I'll ask, "Where's Mama?"
Crickets.
So, we'll turn the page and there will be another picture of Henry & Adam.
"Dada!"
I think he's been brainwashed.
Posted by the Jennings secede from the South at 10:16 AM

OH BUT HE LOVES HIS MOMMA BEST!!!! No one quite ever loves you like your son will!

I wonder if God puts it in children to look to their father who is the priest in the home. It is like a magnet drawn to metal. Also, he sees you much more.... I don't know, but I am like your Mom. He LOVES LOVES LOVES his Momma. Just go away for a day and you'd see!

Haha I love it. Little stinker!

Pretty nice place you've got here. Thanx for it. I like such themes and everything connected to this matter. I would like to read a bit more on that blog soon.