One day, I'll have to take pictures of Henry and Elliot wrasslin' in Elliot's crib. Every day when Elliot wakes up from his nap, Henry is allowed to run into Elliot's room and climb in the crib with Elliot. Then, some sort of wrestling smackdown commences. I realized today that Henry had all these sweet baby moments for 18 months- hallmark moments where I was rocking him or singing to him and the world was quiet around us. You know, the stuff that baby food commercials are made of...

My Dear Elliot will have much fewer of these moments. He's often being rolled over or Henry is standing on his head on top of Elliot's back and the like. Elliot seems to love it so maybe it's a fair trade off.

Anyways, while Elliot was napping this morning, Henry had a picnic snack in his tent. He was cracking me up, sharing food with his stuffed animals. Every so often, I'd hear, I shared with monkey! or I shared with Bear! coming from inside the tent. 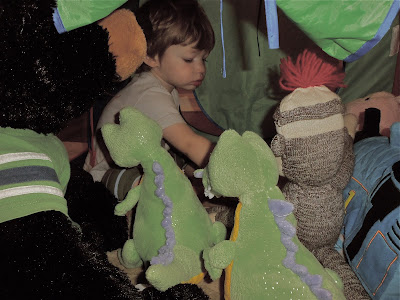 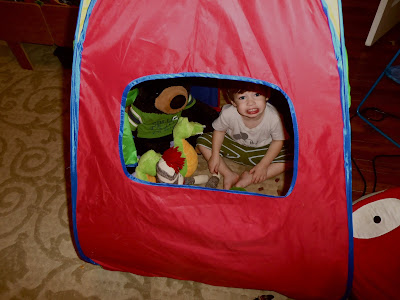 Posted by the Jennings secede from the South at 10:53 AM

I have a feeling our #2 is going to have his fair share of gladiator death match moments. Sheesh. Too bad we don't live closer - they could do a tag team match.

That's awesome! I love that you let Henry in Elliot's crib when E wakes up. Sounds presh. :)

So precious...such a great sharer! So sweet that they have such fun, albeit rough, brother moments! Love the tent!

Sweet Elliot won't ever know the difference:). Enjoy these sweet sweet moments!! I love Henry in the tent. Fun stuff.

Oh Camille! That sweet "cheese face" makes my heart melt! Isn't it amazing how young the rough-housing begins? And you are so right, #2 never gets those sweet quiet moments like #1 did!