Whoa, the poll is at a dead even! (See below Blogher Ad on right column.) Will we have a boy? Will we have a girl? The truth will be revealed in about six weeks.
Belly pictures...belly pictures. I've had a couple of requests for belly pictures.
Here's the deal: I am not so much with a bump, I feel, as with some thickening of the waist. Yes, thickening as my mother calls it. So, until I look more so pregnant and less so post-Thanksgiving meal-y, the pictures will wait. Although I do have my day-we-found-out picture (6 weeks prego.)
Moving on, 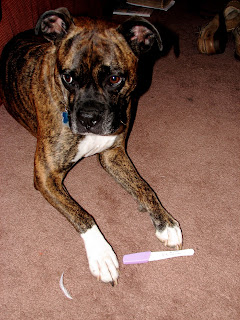 Powers, Powers- how will he adjust? Is he ready to be a big brother? Let's face it, he's kind of our baby (four-year-old) right now. Powers actually had his yearly check-up at the doctor's office two weeks ago and we asked the vet about bringing home a baby with a dog.
He was very encouraging and said that boxers are known to be extremely good with kids. However, we need to make sure that Powers knows that he is below the baby in our pack. We also read in Marley & Me that you can bring home a poopy diaper from the hospital for Powers to smell and investigate to prepare him for the baby & baby smells. Adam is definitely the alpha male and so we've also heard that he should be the one to bring the baby into the house.
Any ideas? Thoughts on bringing home a baby with a dog in the house?
Posted by the Jennings secede from the South at 5:58 AM

One of the things we did with our dog was we brought home one of the nursing blankets from the hospital and let our dog smell the blanket. That way he knew what her scent would be. I would advise this over bringing home a diaper full of crap. Dogs already know what that smells like!

Overall, our dog had a hard time getting used to Anna. He was our kid for almost 8 years before she came along. He was just too old to get used to her and by that time, he could care less. Hopefully since Powers is younger, he will adjust. Really, they kind of don't have a choice.

I have a wonderful, sweet pound dog and I NEVER fully trust him. I agree with the smelling of the baby blankets, that seemed to work for me also. And having Adam be firm with the rules. My kids are 2 and 31/2 now and they all get along nicely and love to play ball!

My mother-in-law had a boxer and she used to keep my son when he was about 12-18 months old. They were great pals! No trouble at all. (This was outside though) But all dogs and all kids are different. I don't know what I'd do.

love the picture! Well, we never brought a baby in the house for the pups to live with - but we brought Sam & Eddie and they did fine. :) Thats really no help to you though!

I do think Powers will love the new addition to the family and he will do great with the baby!

When we brought Audrey home from the hospital, we put her "bucket" (baby carrier) on the floor and let Grover sniff and lick all over her! They were great together. He would even stand on his back paws abd rest his front paws on the railing of her crib and watch her sleep - precious!! When we brought Abby home, well, by that time, Grover had moved into his mansion outside and was/is no longer an inside dog. One of Abby's first words was "Go Go" and she loves to look at him through the glass doors.

Camille-soon-to-be mommy, we have a Jack Russell, Daisy, and a Pit-Bull, Tucker. Yes, a pitbull. We brought him one of Jackson's hats and let them sniff it. I think it was the hospital's one.Jackson stayed with that hat on and we figured that would have a good "sniff" on it.

I also like the idea of bringing home a blanket or peice of clothing MUCH better than poopy diaper. Less disgusing too. I voted on the poll but I'm so TORN! Do I want you to have a girl so our kiddos can be best friends or a boy so we can have an arranaged marraige and finally be related? Hmmmm....how great would it be to have you and Adam as in-laws!!!??? :)

I think Powers is going to love that baby to death...he is a sweetie. Your only problem might be his love for licking. :) You might have a slimy baby.

CONGRATS!!!!!!
You guys are gonna be SUPER AMAZING parents who will raise up children to love the simple things, nature and adventures!
I cant wait to see thos belly pics! :)