Soo, Adam & I love LOST.  When we started dating our senior year in college, LOST was in it's first season and we became addicted.  It's not so much an enjoyable show....it's just you want, nay- you need, to find out what the heck the mystery is.  Only one more season after this one and then we can all rest easy...
So, a few episodes ago, I had an epiphany... I never come up with LOST theories, so I was pretty excited.  So, you know Daniel Fariday- our physicist? 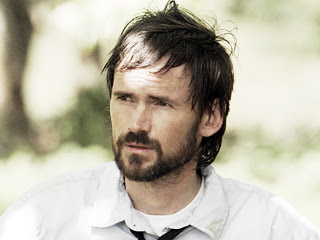 Okay, so remember a couple of episodes....when the island flashed back in time to the H bomb days? Remember the woman with the blonde braids that held Daniel at gunpoint and walked him out to the bomb to dismantle it? I think THAT is his mom (Eloise Hawking) and that Charles Widmore (remember...the young Charles Widmore was on the island at that time...) is Daniel's father. Thus, Penny is Daniel's half-sister.

Tonight, we went over to Brooke & Freeland's for supper and talked about LOST for twenty minutes and I tested out my theory on those two...I got a good response- they thought it was quite possible & even made sense.

Thoughts, LOSTies?
Posted by the Jennings secede from the South at 5:48 PM

Oh, Camille, I WANT to like LOST and I like the concept..but I get sooooooo CONFUSED. A better way to put it would be to say...I am "lost".

Ok...i can totally see that! I'm still shocked/confused about Jack's dad being on the island and who he really is! You are right on about it not being an "enjoyable" show! I always have more questions than answers.

It has been pretty much confirmed that the girl that held Daniel at gunpoint is Daniel's mother---her name was Eloise, and as we found out in the last episode, Eloise Hawkings is Daniel's mother. It is widely speculated that Charles Widmore was actually Charlotte's father and that is why she grew up on the island.

oh- I like it!! Good Theorizing! My latest theory is that the smoke monster morphs into images/people/things from others' pasts to try to influence them on the island (ie. when Kate sees the black horse, or Hurley sees the guy from the mental institution or Rouseau's husband comes back out of the hole and tries to kill her)Brian used to go to this "spoiler-alert" site where he would find out all the theories beforehand, but I think that's no fun. It's so much better to try to figure it out yourself. Not to mention...how creepy is it that when Charlotte was dying she thought that Daniel was the one who told her she would die?

Camille, I don't remember how I stumbled across your blog, but I love it...and I love LOST. I thought the same thing about Widmore and the army chick being Daniel's parents! Maybe we'll find out something tomorrow...

And a belated congratulations on baby Jennings too!

major props for figuring it out! Our conversation was even confusing me at the end.. its so hard to keep up!