Well, if you've ever read this blog then you're familiar with our little stinker, Powers. He is our four-year-old boxer. 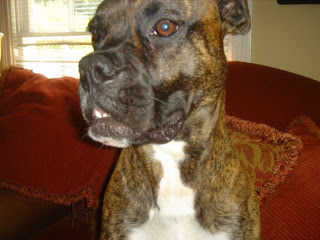 And if you're familiar with boxers, then you know that they can be bad about getting into the trash while you're gone. (My boxer book says it's the one thing you can't train a boxer not to do.)Now, Powers has been pretty good about this lately but yesterday, Adam & I came home after work and saw a couple of pieces of clear wrapper on the floor in the living room. Small pieces, but it looked like bread wrapper. I made out the words "Roman Meal" on a small sliver of plastic. We couldn't figure out where the rest of the wrapper went or how he would get a loaf of bread since we keep it on top of the fridge (and our current loaf remains on top of the fridge) plus there were no crumbs so we chalked it up to an unsolved mystery.

Well, later that night, I was cleaning the couch and I lifted up a cushion and there, wedged behind the cushion and pillow, was a large, empty wrapper from a loaf of bread. Mind you, this was clearly not this week's bread...it was still on top of the fridge. But it was multi-grain bread...lots of fiber. So, we guessed that Powers had just went to town and ate the whole loaf of bread at some point during the day and then HID the evidence (actually buried the evidence).

Well, that night, we got ready to get in bed (upstairs...away from the kitchen & sofa) and we pulled back the comforter and there, underneath the covers, were bread crumbs everywhere. Powers had taken the multi-grain bread and eaten it in our bed, UNDER THE COVERS! What a little sneaky sneaky stinker. We laughed pretty hard about his ingenuity and decided that we'll have to watch Baby Jennings' stuff around him before it starts disappearing too!

And where the bread came from? The world may never know. 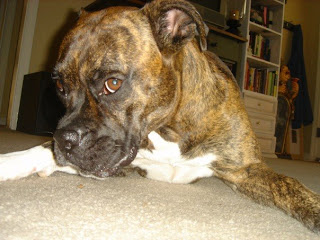 Posted by the Jennings secede from the South at 10:23 AM

that is too funny!

From my experience, even 4 year olds (and 2 years old if you refer to my nieces and nephew) already know how to be sneaky. Especially when it comes to sneaking food.

I just read this out loud to justin and we laughed so hard! Our "babies" sure can be toots sometime! Too funny

Are you sure Powers did it? He probably had a dog party while yall were at work. Put up the "nanny cam" and watch him while you're away. That could be a whole new reality show.

My parents' black lab, Chief, used to do stuff like this in his younger days (now he just lays around and gets attention and treats). He once hid a bag of Oreo cookies in a couch cushion - my parents realized this when they caught him sneaking a few from the bag.

He also somehow unwrapped and ate a bag of chocolates. Fortunately he never had any side effects - we still have no idea how he carefully unwrapped the chocolates without eating the foil.

I THINK POWERS WAS TRYING TO SAVE A TREAT FOR GRANDMA AND GRANDPAS VISIT AND IT JUST FELL IN HIS MOUTH! OF COURSE I AM PARTIAL TO MY OLD BUDDY POWERS.
CHRIS
(DOG HOUSE PET GROOMER)

unfortunately, one of our hounds, despite being punished fairly frequently, insists on taking whatever can be found ANYWHERE that looks like food. Broken bowls, trash all over, etc. This is the life we live.

maybe Freeland has been sneaking bread over to your house for Powers. ?!