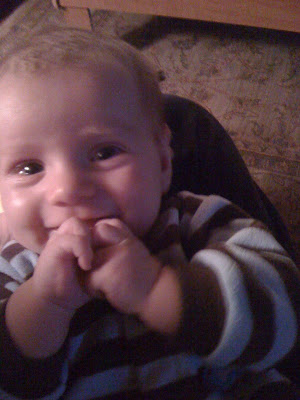 *giggle, giggle*
I love gnawing on this little guy's chin. Is that so wrong?

A notable difference between raising my 1st and 2nd son: With Henry, at the 4 month mark, we were like YES! Let's give this kid some rice cereal! Wheeee! So much fun! With little Elliot, I'm all, I think I'll wait until closer to 6 months. Because I have learned that oatmeal and rice cereal become an invincible glue on our floors, tables & high chair which not even the Hulk, armed with a chisel and the hammer of Thor, could remove. And I'm kinda lazy. And breastfeeding is just so darn easy right now. No preparation. Just whoooop, whip it out. So, no hurry on the real food front. That's all I'm saying.

Speaking of food, Henry, although born to the most carnivorous father since the T-Rex, is not a meat guy. He's a black bean guy. He's a peanut butter guy. But not so much with the meats. This is fine by me...inexplicable to Adam. Hey, he's a picky toddler. The other day he said "no" to 8 items of food and then ate shredded cheese for lunch and then dumped the remnants of it all over the floor. He does love grapes. So do I! (and Carmie Smith- in fact, we used to spit a grape from one of our mouths into the others mouth in high school...and we were really good at it! Wait, Why didn't I have a boyfriend back then....weird!)

Speaking of food, again-again... I just went to the grocery store with Elliot and I picked up a cookie from the prepared foods section area and peeled off the wrapper and ate it as I walked around the store with Elliot strapped to my chest. Chocolate chip cookie crumbs rained down onto his monkey hat but I like to think that it helped me pass on impulse buys...having a cookie in my mouth/hand.

Also, it helped me not to get hit on... that's usually such a big problem, ya know.

don't worry- i kept the cookie package and payed for it at check-out. i may be hungry but i'm honest.
Posted by the Jennings secede from the South at 12:38 PM

i waited until 6 months for rice cereal too with noah! breastfeeding was so easy from three or four months forward...love your cookie story:o)

yeah we were good at it! Boys don't find that attractive?!

Thanks for the laugh!!! I felt the same way with #2 and food.

thank you so much for the grocery store suggestion!! you are so funny!

I am totally with you on the oatmeal/glue that ends up everywhere, never to be taken off again! I read that section of your entry to DH who was laughing as he has attempted to chisel it off himself quite a few times with no avail. Today we had a total breakthrough on this issue and I thought of you! The cement oatmeal was driving me insane, so on a whim I took a magic eraser to the highchair (which is wooden...I think it can make it even worse to remove from wood vs. plastic...ugh). It was like a miracle product!!! That magic eraser took the oatmeal off every single surface I tried (wood composite table, solid wood highchair, and wood floors)!!! You have got to try it...let me know if it works for you too ;-)