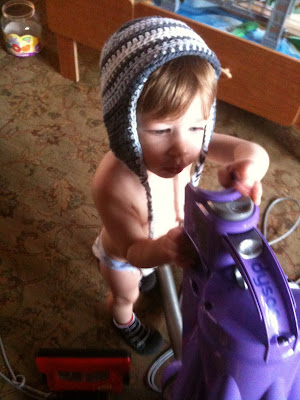 My friend Casey recently posted about her son's upcoming birthday and how she'd like to make that a marker for getting rid of the pacifiers. I have been thinking about this some, too. Henry will be two on April 21st. On his 1st birthday, we relegated his pacifier use to his crib but it is a serious sleep tool for him. He gets into his crib, puts one paci in his mouth and then hoards the rest of them (like 4 or 5 pacis) between his hands as he falls asleep. When he's ready to go to bed, he says, "paci...paci...paci..."

I'm not very excited about taking the pacis away.

Also, we're moving at the end of May. So, should I dump the pacis a month before we move into a new house? I mean, on one hand, pacis might make the transition easier. On the other hand, Henry might become even more attached to pacis if they aid him through this transition.

The guy who cuts my hair in Louisiana said that when his son turned two, they had a big party. At the end of the party, they gave him some helium balloons with all the kid's pacis attached to the ends of the strings. Then had told him that he was a big boy now and that the babies in heaven needed pacis and so, when he was ready, to let go of the balloons and they would go to heaven to be with the babies. His son was fine with this and let go of the balloons and went on his merry way. However, I can see Henry lying prostrate on the ground, weeping and in hysterics watching balloons carry his pacis away.

So, trying to figure out what that transition should look like and when it should happen. Probably step one is getting rid of the 5 excess pacis in his crib...
Posted by the Jennings secede from the South at 9:04 AM

I hear ya on the paci thing! I think we could have gotten rid of it at 1, but we let her sleep with it and she is 2 1/2 and still has to have it when she sleeps. I am thinking once the baby comes we will have more paci's in the house so I don't know what to do!! My niece is 3 1/2 and she still sleeps with hers so I have to say that it really isn't a battle I feel like fighting right now if it is only in her bed! : ) Good luck!!

Pacis on the balloons is such a cute idea. A few months ago (probably too early but oh well) I snipped the end of Dean's paci off. He put it in his mouth to suck and realized that there wasn't the same sensation going on. He got completely ticked, ripped it out of his mouth and threw it on the ground. He picked it back up 1 minute later and repeated. It took us about 2 days for him to get over it and just fall asleep. Looking back on it the method seems a bit rigid (especially compared to the pacis floating to heaven) but it worked for us! Good luck, mama!

I had a friend whose daughter was really attached to her pacifier. They took the pacifier to build-a-bear and put it in the stuffed animal she picked out. That way the pacifier was still with her, but not stuck in her mouth! :o) I think she called it her "binki bear".

with emma it was like taking crack from an addict. i had to physically restrain her!! best of luck...

Yikes. I'll look forward to reading your experience. Mathew is also a fan of the paci, and when he turned 1 we started giving him pacifiers only at naptime or bedtime. He, like Henry, has to have at least 2 or 3 at a time, because he likes one in his mouth and another (or 2) in his hand. Unfortunately the pacifier is the only "soothing" object for Mathew. He didn't really take interest in a blanket or anything like that, so I don't know what our transition will look like either. Good luck! Kids are resilient (or at least that's what I can tell myself sometimes). :)

have you heard of a wubbanub? if not, google it :) it's supposed to make the transition easier because they still have the lovie to hold on to, which is really the idea behind the paci at this point... :)

forgot to tell you.. my friend was telling me what she is going to do because its what they did with her little brothers & it worked well. They got in the habit of always saying "lets throw this or that away" so one day they said "lets go throw the paci away" (she said they always put stuff in the trash so it wasnt strange to either of the boys) and then later that night when he wanted it they said "but you threw it away so we dont have it anymore" and he was upset but didnt freak out. The next day the same thing and then just forgot about it. She said she liked that he was the one who did it so it wasnt their fault. ha.