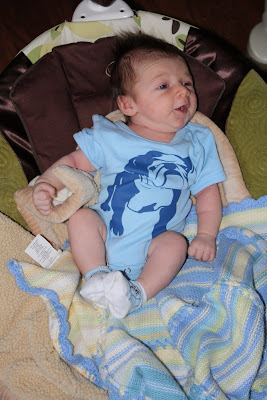 Adam and I created these playlists for Henry when he was just a-cookin' in my womb. Soothing worship tunes meant to lull our son into sleep and create a peaceful atmosphere. Sounds wonderful, right? Well, turns out that he prefers "Hollaback Girl" and "Let's Get Retarded" and other soul-searching, meaningful songs. We found this out when he was fussin' the other day. Did the serene hymns bring peace...no. No they did not. Instead, Hollaback Girl lulled him to sleep. Then another song came on...a slow accoustic one. Henry began fussing a bit and so Adam switched it to the next song, "Let's Get Retarded" and ba-da-bing. Out like a light. 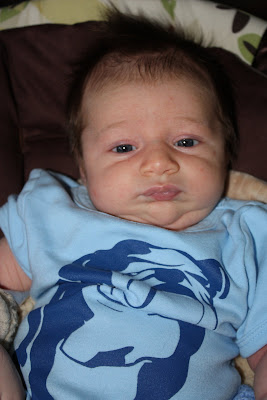 Posted by the Jennings secede from the South at 10:17 AM

Oh My Heavens! Look at those cheeks...He has more chins than a Chinese phonebook (ok, not really but i heard that the other day and have been wanting to say that) :) I love that onesie!

HENRY-MY HOW YOU HAVE GROWN! Just like a "Little Adam" staring at me. Hopefully YOU, HENRY, will not question MY GREAT WISDOM!

this story makes me laugh so hard~! the fact that you said retarded twice in one blog also made me laugh=) i definitely had to read this one out loud to justin over lunch=) little henry has good taste=)

at least he's not into something like alvin and the chipmunks!!

You go Henry, you get down with your bad self.

Our Journey Towards Forever said...

Hi, I came across your blog a while back and have found your story to be very inspiring. Could you please tell me where you got your son's blue onsie with the bulldog on it? Thanks!

It looks like Henry takes after his Aunt Brooklynn! (Hollaback girl just happens to be one of my personal favs .. and I get the feeling he knows this!) I cant wait until we have dance parties while were babysitting now!

Love who ever wrote "boom boom pow" too

Angela,
The bulldog onesie was a gift! I'm not sure where she bought it, sorry!

Hahahaha... You crack me up...you will learn they never do exactly like you think they will...one surprise after another. So much fun! He is really growing and cuter every day.