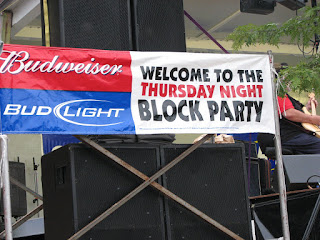 Well, if I thought last night was a diverse crowd, tonight was uberfied.
and we loved it!

We headed out with the Allen's to the block party on French Street, by the Sea Wolves stadium. Cool setup, lots of people, and we met some folks who recognized us from the article (thanks for being so friendly!) and had a good time listening to 2 great bands- The Sam Hyman band and the Boys Room Band....or men's room band. i can't remember.

During the Sam Hyman band, a semi circle was formed around the stage and the crowd went back from there. In the center of the semi-circle we had a 3 dancers, who, may I say, danced their little hearts out. We're talking no inhibitions, people. I mean, the band was very good, but this was the real entertainment. They stole the show. They were fantastic. 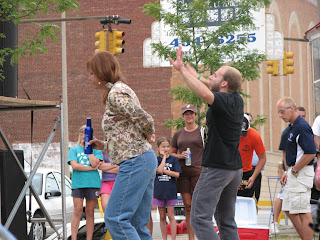 These photographs do not capture the essence. In fact, today's film technology is incapable of beholding what our eyes captured. 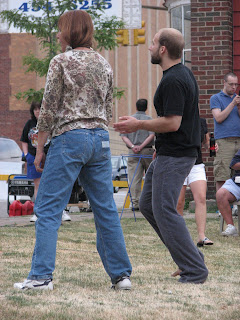 Then the 2nd band was setting up, we thought by the looks of things, that they would be....a more "herbal" band, which would've been fine. But then the blues brothers busted up on stage and sang the oldies! They were a really fun band & we had a blast listening and people watching. And, might I say, the tambourine girls tamboured like it was nobody's business. Never in my years in the biz have I seen such tambouring and sychronization. Such dedication to the art. 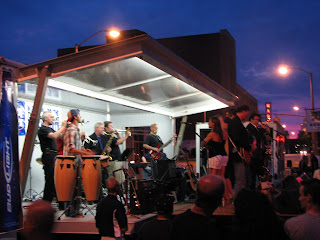 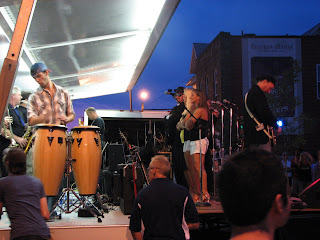 All in all, a great Erie celebration. There is so much to do in the summer and we've had fantastic weather! The night concluded with the always delicious marble slab to discuss new revelations in erie dialect. (example: many folks here leave out the phrase 'to be' in sentences. Instead of "The rugs needs to be cleaned." We hear "The rug needs cleaned.") Successful outing. 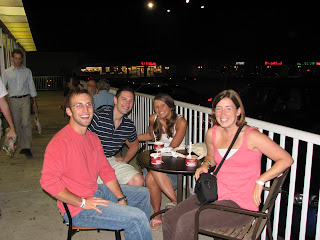 some friends we met who amazingly recognized us from the article. These folks are really nice! 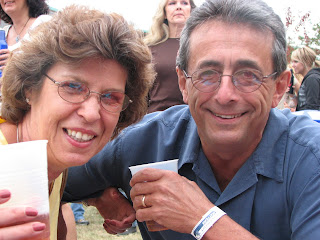 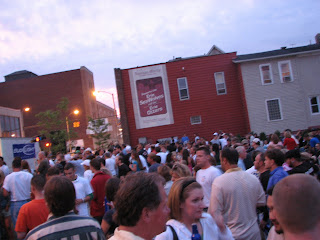 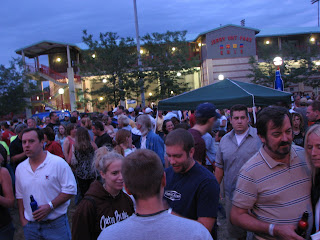 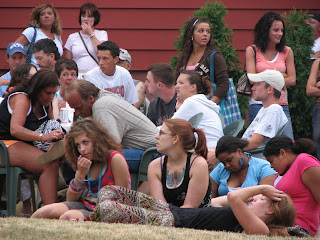 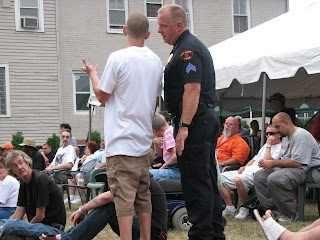 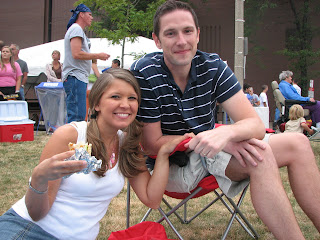 The fabric of society is fun to watch.
Posted by the Jennings secede from the South at 7:35 PM

I'm glad you guys moved here now, instead of a couple years ago - you might have gotten a different impression. At Celebrate Erie (A festival around August I believe), there was a huge fight on the last day and it had to be ended early because of it.

I thought of this when I saw the kid talking to the cop - Some of the younger people don't know how to act, but thankfully for you guys they're not the majority.

Welcome, and I'm glad you had fun! Have you thought of coming to the Erie Bloggers meetup on the 10th for a little picnic?