Got home from work, took a run with the husband & pup, threw back some day-old sushi, quick shower, and am now about to head out for small group but first had to share this quick story: 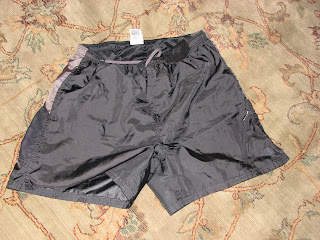 These dynamite NorthFace shorts are legendary. If I had a #1 fan, they would spend thousands on these off of ebay. The aforementioned shorts were purchased from Ross Dress for Less for $3.99. (Yeah, I know- good deal for North Face shorts). So right off the bat, they're already miracle shorts. I purchased them my senior year in college, copying my uber-cool roommate, Cara "Latin Sensation" Sanders.

I wore them all the time. To walk around, to hang out with my new boyfriend, Adam Jennings, to the store- I loved them. Adam & I hadn't been dating too long when college ended and Cara & I moved into a little rent house. The former tenants (friends of ours who went to our church) still hadn't moved out completely, so we were kinda sharing a house with all our junk and the ac wasn't working too well (Not great for June in Texas). Well, my hamper was buried somewhere in the garage so I just used a big, black garbage bag. So one day I had gone for a run in these miracle shorts and thrown them in the garbage bag of clothes and drew the yellow stringy thing and hung it on the closet door. Well, a few mornings later, Adam & I were going to go on a run with Powers before work. I couldn't find any shorts so I pulled my miracle shorts out of the dirty clothes trashbag, threw 'em on, and ran out the door. Adam & I began running Powers.

Now, for some reason, Powers is acting really weird on the run. Like, he is all up in my grill even though Adam has the leash. And he keeps shoving his nose into my shorts. "Quit, Powers!" I playfully holler. But I'm getting nervous. "What's that smell?" Adam asks.
"Um, I don't know," I reply, now perfectly realizing that it's the fragrance of my sweaty shorts left for 3 days in a sealed garbage bag in a 90 degree house.

By now, I'm getting tangled in Power's leash as he tries to inhale the fragrant aroma of my shorts.

A few painful minutes later: " I think it might be your shorts. Is there something in your pocket?"

Long story short, I don't know how Adam continued dating me and, behold, married me after getting a whiff of these shorts. My roommates cackled and howled and it took many a wash to get the smell out. Even today, after a hard work out, you can smell the faintest whisper of stank. Okay, maybe it's not so faint. But these were the miracle shorts and so even today, I must run in them. $3.99, people!
Posted by the Jennings secede from the South at 2:40 PM

CAMILLE-I DEFINITELY TAUGHT YOU BETTER! $3.99 or NOT-OUT THEY WOULD GO HERE!

i can understand strong attachments....those poor shorts did not do anything wrong...it wasn't their fault--what happened...they don't deserve to be "trashed"; i admire your loyalty...

Gotta love that place. I have many Ross treasures ...shoes to pots and pans. My favorite soooofffttt sheets... designer hangers...you name it! All for a song. Do they have them in PA?

Soak them in vinegar for a while and then wash them...see what that does.

LOL, this is soooo me!!!!!!! I have 2 pairs out of like 10 that are MY FAVORITES...I will DIG them out of the laundry all dirty and nasty from a day of step aerobics and then walking 3 miles in the humidity in the evening w/my hubby. I LOVE MY shorts too...I am glad I have cats (they don't go for the crotch). I have also heard members of my family at times ask "hmmm what is that smell" all the while I am chuckling under my breath.

Good thing you moved in with me in July of that summer and became more sanitary. Sad confession is that I often wear the same running clothes 2-3 days in a row. You know....toss them on the floor, let them dry out, put them on the next day after work to work in the yard, go run again. It's that sort of environmentally friendly...trying to conserve water and all? My mom would die!

YES!!! I do the exact same thing...thankfully though I have a working AC.

I'm so happy that you mentioned Miss Cara in your blog - Have you talked to her lately?

Oh btw, I forgot to tell this, but I really like that RUG that keeps showing up in your pictures....move your shorts off please, you are going to make it stinky!

i love those shorts cami!!! i took them on a hiking trip with my dad (and i'm not sure if you even knew)! I'm a little sneaky! So happy those shorts live on!!