Last night, we took our newbie Erieites (spelling?) to Presque Isle for the first Wednesday of the Sunset music series. Future Dr. Jennings parked us a good mile away from the actual concert but hey! Who doesn't like a good walk? (He knew there were closer spots- he just wanted to make sure that we complied with the government recommendation for 30 minutes of exercise a day, right, Adam?)

The concert was fun. There were loads of people at the beach spread out all along the sand on their beach towels and lawn chairs. The band (Duke Sherman blues band) was really good. The peoplewatching at these events is spectacular. (As in watching people at these events is fun. Not as in the actual people who are watching this event were fantastic. Although they are, I'm sure.)

First off, this kid in front of us dug the most gigantic hole that I've ever seen dug at the beach. Apparently blues music makes him want to be in China? 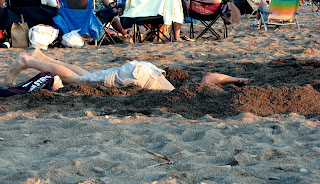 And, oddly enough, the sun really does set during the Sunset Music Series. 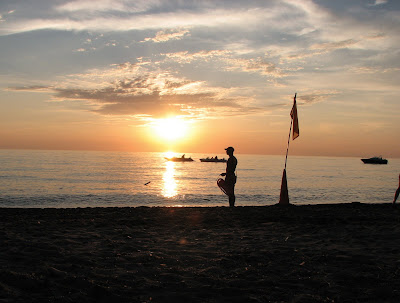 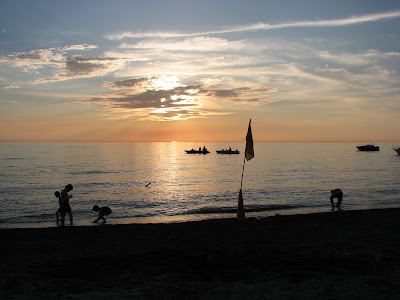 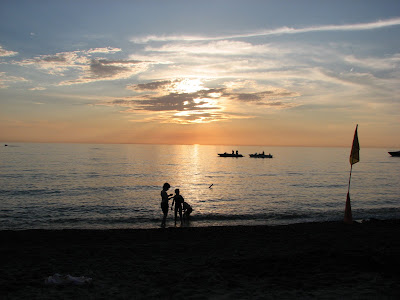 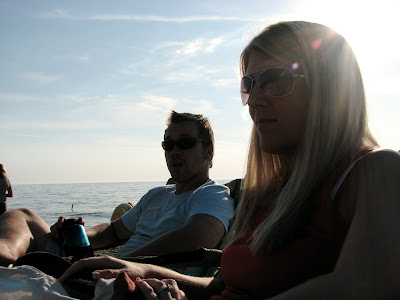 We were kind of far back but you could still hear the music really well. Sadly, because of our proximity, Freeland's goal of ending up naked on the stage by the end of the night was not met. He was just kidding... we think. 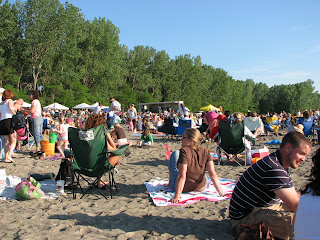 Me & my absurd glasses with my wonderful hubster. 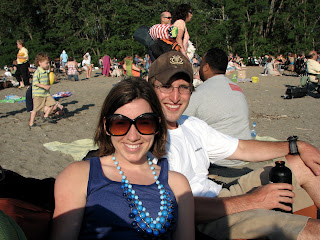 I also have a picture of the most sunburned person ever but I need photoshop so that I can blur out faces. Otherwise, I feel kind of bad posting a picture of severely sunburned stranger. He was in need of some serious Aloe.

All in all, a great night. There are still 5 Wednesday nights left in the music series so head on out if you're so inclined. There are lots of families and some people even bring their dogs (on leashes, of course). So, maybe I'll see you at the next one!
Posted by the Jennings secede from the South at 3:44 AM

You can just crop the picture of the sunburn and take his head off-well not literally! MORE SUNBURNED than at the Florida beach? I DON'T BELIEVE IT!

last night was a good night for an outdoor concert! Duke Sherman is a great band, an Erie staple.

Hey guys,
It's Kara, your favorite Erie Times-News reporter. In the true "Erie's-such-a-small-town" fashion, my fiance is the bass player in the Duke Sherman Blues Band.I'm glad you guys enjoyed them! It was a perfect beach night. The band will be at Conneaut Wine Cellars next Saturday for another outdoor gig if you're looking for something to do. Sorry I didn't see you last night among the 4,000 people there! Hope you guys are doing well.

No way! What a coincy-dink. Thanks for the info!

I love people watching.....although I am not a fan of huge crowds.

Dr. Jennings has a nice ring to it, eh?

Those sunset pictures are beautiful! Looks like FUN! Miss you!

there is nothing absurd about your glasses! the bigger the better=) love them!

Great Sunset...Looks like Erie Chamber of Commerce Travel Cards. You guys seem are having a great summer. I am green..

Great Sunset...Looks like Erie Chamber of Commerce Travel Cards. You guys seem are having a great summer. I am green..

IMHO, you should wait longer to take your sunset pictures. The colors get significantly better after the sun is gone and the light is starting to fade. Also, if you can get a day with just a little bit of cloud cover, your colors will be better...